The relationship between Heeb magazine and Streit’s Matzo goes back to the early 2000’s – To the very beginning of this publication, when we were an upstart zine carving a space for ourselves on magazine racks across the country, and when Streit’s Rivington Street Matzo factory loomed large as a Lower East Side icon. It was then, in our early print days, that we published what is arguably our most recognizable ads to date: 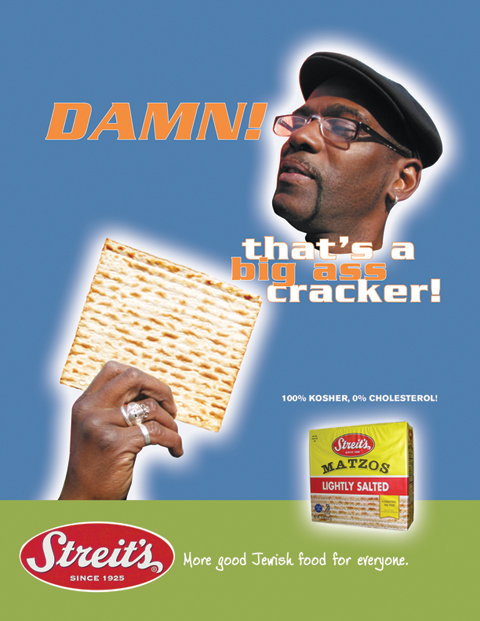 But, the world turns, things change, and nothing gold (or, in this case, flaky beige-ish) can stay.

Since that ad was unleashed upon the world, Heeb has transitioned from a print magazine to an online-only publication, and now comes word that Streit’s – the family owned Matzo business that has stood on the corner of Suffolk and Rivington since 1925 – is preparing to uproot from the iconic red brick factory it has occupied for generations. Filmmaker Michael Levine (about whose Streit’s-centric documentary we’ve covered on multiple occasions) writes today in Bowery Boogie:

Yesterday afternoon, in a cramped lunchroom on the factory’s third floor, workers gathered to hear the news from the Streit family that the factory will permanently close its doors on Rivington Street at the conclusion of this year’s Passover baking season. The four tenement buildings that comprise the factory are now under contract to a developer, whose identity and plans for the site have yet to be made public.

The business itself will remain, as it has been, in the hands of the Streit family, who hope to find a new home for the factory and as many of their workers as possible, though no site has been chosen. Alas, perhaps the only certainty at this time is that any new factory, to be sustainable, will have to be built outside of New York City.

This is, of course, a huge loss to those of us who like our Lower East Side to still thrum with the sights, sounds, and smells our families likely experienced nearly a century ago, when they carved out their own place to call home in a Manhattan that has become so wildly different since then. For many of us, the significance of Streit’s factory wasn’t so much about eating the Matzo they produced, as it was knowing that it was there, year after year, decade after decade, keeping alive a spirit of the Jewish Lower East Side that is disappearing before our eyes.

As Levine writes in BB:

After the announcement, I asked one Streit family member if anything could possibly keep the factory running on the Lower East Side. As he sat behind his grandfather’s desk, staring unblinkingly at the family portraits on the walls, he said simply, “it would take a miracle.”

It’s taken a fair share of miracles to keep the factory in the neighborhood this long, so I choose to hold out hope that one more is on the way.

I don’t put much stock in miracles – especially when it comes to land development deals in Manhattan – but I do know that Streit’s helped put Heeb on the map. And now, after this coming Passover, maps of NYC will likely have to be altered in order to reflect Streit’s glaring Lower East Side absence.

And that’s a big ass shame.