What’s Wrong With You: A Fetish, A Phallus, A Miserable Month 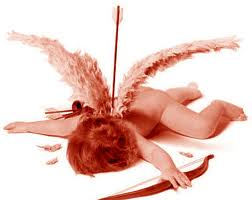 My birthday and Valentine’s Day both fall in February, and they both inevitably suck. I never have a boyfriend for either one of them, and whatever plans I make with friends always fall apart–from my flight to Jamaica getting canceled one year by the only snowstorm of the season, to my ice cream cake melting in a broken freezer. So. Here it is February first, I have a stomach virus, my car probably got towed because I was too sick to move it, and my best friend just reneged on taking me to dinner for my birthday because her uncle’s grandmother died. Is the whole fucking month cursed?

Ah, February: four weeks of love shoved in your face. And in the Jewish tradition we have Adar, whose fourteenth day is Purim, which according to Rabbis–Rabbis, not greeting-card executives–we’re supposed to be joyous about all month long. That’s right, an officially-sanctioned full moon-cycle of happy over a single Earth-spin of bacchanal. How does this pertain to your misery? Well, besides calling like-numbered boxes on their respective calendar pages home, Valentine’s and Purim share roots in ancient fertility rites. If you’re Jewish and not getting laid, then, it makes sense to begrudge both holidays–and for the whole fucking month to feel cursed.

At least it isn’t a leap year.

Dreaming of warmer weather myself,

I’m a Jewish girl, recently met a Jewish guy, and we seem to have hit it off. My only concern is that his last girlfriend was Vietnamese. While he hasn’t had a string of Asian GF’s, I have a history of getting involved with Jewish men who have Asian fetishes, so I’m worried that he might just be rebounding with me. I’m petite and have straight-ish (albeit very thick) black hair. I get why I attract these types of men. What I don’t get is why I don’t seem to attract anybody else–it’s like I have a fetish for men with an Asian fetish. Should I give this guy a chance, or bail before I get hurt?

Unless your first “true love” dumped you for an Asian woman or your father left your mother for one, let’s take a few steps back for the wide view: your juju is superficial men. Perhaps charismatic Alpha types who tell you you’re hot before asking your name? (Not that superficial people with ethnic fetishes are necessarily charming, but the charmers get dates.) I’ll let you stay with your current beau because it sucks to be alone on Valentine’s Day. For your next BF, though, find a gentleman who prefers blondes–or tall, curly-haired brunettes with Jewish hips, at least–and show him what you’ve got that matters. A magnet for the wrong sort of suitor is free to also be a moving target.

I arrived at my therapist’s office one afternoon expecting to find water in her waiting room, where she leaves out a Brita pitcher and paper cups. The pitcher was empty because the building’s water was temporarily turned off, but she offered me a bottle of Poland Spring from her stash. Fast forward to my next bill–with a three-dollar charge for water! Who’s the sane one in this relationship?

As I’ve noted in this space before, therapists are as crazy as the rest of us, if not crazier. Good for them for choosing helping professions primarily to help themselves–but have you ever met a mental-health practitioner in “real life?” I live on the Upper West Side of Manhattan; among my building-mates are a psychoanalyst who screeches at her kids, a psychologist who can’t make eye contact in the elevator, and a social worker who believes dairy causes brain tumors. And let’s not forget the therapist who disapproves of children singing (or the aunt, for that matter).

All of which is to say, if your shrink charged you for tissues or hanging your coat–and you otherwise like her–I’d be advising you to let it go. Maybe she’s losing clients to life coaches and needs the cash. But water bottles are so blatantly phallic…. while feminine paper cups are free? That’s an extra layer of neurosis, several layers probably, that ought to be addressed. Don’t let her deflect the matter back to you, and don’t forget to send her a bill.