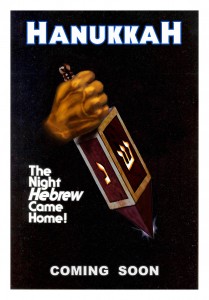 Move over Halloween, Black Christmas and Valentine. Hannukah: The Movie could be coming to a theater near you (or at least one in Los Angeles or New York) soon.

The story begins in 1983. After a seven day bloody rampage, original Hannukiller, Judah Lazarus, is gunned down by police just as he is about to sacrifice his only son, Obediah. Fast forward to the present as the young Obediah turns to religion for guidance, but soon becomes just as fanatical as his deceased dad. Deranged and thirsty for blood, the new Hannukiller sublimates his hatred of his father towards “the goyim” and “bad Jews.” Eben McGarr directs what could be the greatest Jewish horror film since Night of the Living Jews.

For more info, check out the film’s facebook page.