Does a Tom Cruise Comeback Rest On the Shoulders of This Guy? 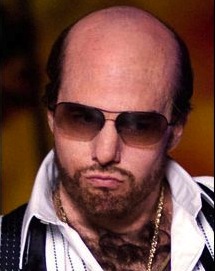 After his hilarious performance during the MTV Movie Awards on Sunday, Tom Cruise may have gotten himself back on the radar of  the MTV generation.

Performing in his Les Grossman character—the hirsute, foul-mouthed movie exec from Tropic Thunder, who some say reads as a cross between Joel Silver and Scott Rudin with a pinch of Sumner Redstone, Cruise shook his tuches alongside J.Lo to Ludacris’ “Get Back.”

Now the internets are abuzz with rumors that Cruise’s performance was a prelude to an impending Les Grossman movie. It’s kinda refreshing to think that the fallen leading man’s Hollywood comeback may rely on a schlubby, Jewy megalomaniac.