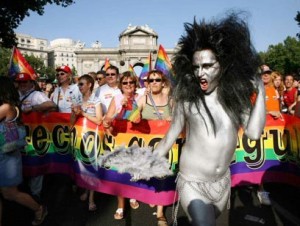 Organizers of the Madrid Gay Pride Parade, one of the largest of its kind in the world, have rescinded their invitation to Israeli representatives, according to Ynet.

Israel, represented by the LGBT Union and Foreign Ministry, was, for the first time ever, set to have their own bus in the Parade. But according to the Spanish organizers, since the flotilla incident, they can no longer guarantee adequate security for the Jewish marchers.

Yossi Levy, an Israeli foreign ministry official, responded by arguing that if any country deserves to be barred it is certainly not Israel.

“Israel is the only country in the Middle East that holds Pride parades, hangs Pride flags on the streets and respects the gay and lesbian community’s rights.”

Levy criticized the parade planners: “Those who decided to prevent Tel Aviv’s representatives from participating are dragging the Pride Parade into the hallways of the anti-Israeli inquisition, instead of marching on the path of tolerance and dialogue.”

When you find yourself sympathetic to the public pronouncements of an Israeli government official, you can probably feel confident that something fucked up has gone down.