Robert ‘Juan Epstein’ Hegyes of Welcome Back, Kotter Dies at 60 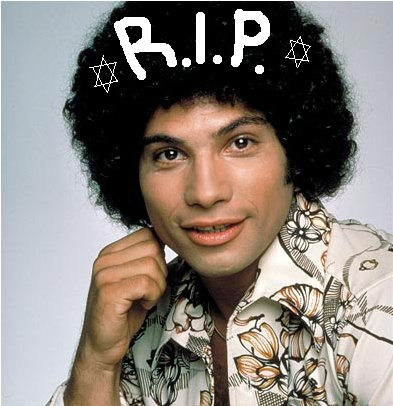 Robert Hegyes (neither a Jew nor a Puerto Rican, which tells you what a good actor he was), who played Juan Luis Pedro Felipo de Huevos Epstein, the Puerto Rican Jew on Welcome Back, Kotter, died on Thursday at the age of 60. The report says “heart attack,” but we suspect that it was the fear that the Ice Cube remake of Welcome Back, Kotter might still be made.

After The Goldbergs (1949-1956) went off the air, TV became a bit of a black hole for Jewish characters. Then came the 1970′s, and ethnicity was suddenly in again. Just as blacks and Latinos found themselves blessed with a spate of characters, Jews too were given a chance to shine on the small screen. First came Rhoda (1974-1978) and Barney Miller (1974-1982), perhaps the first shows since The Goldbergs to be named for Jews, but without question, the show with the highest JQ (that’s Jew Quotent) was Welcome Back, Kotter (1975-1979).

Gabe Kotter himself was not only a Jewish character, he was a Jewy character. Set in Brooklyn, Kotter was played by native Brooklynite Gabe Kaplan. Most episodes featured semitic jokes about Kotter’s various relatives. Moreover, Kotter was not the sole Jew on the show, unlike on the execrable Head of the Class (1986-1990), known to Jewdar as “the most antisemitic TV show in history”–I mean really, a gifted class in a Manhattan high school without a single Jewish student? The other semite on Kotter was Epstein (Hegyes) of Puerto Rican Jewish descent. As he let us know in the first episode, half his family was out stealing pants, the other half was mending them. Of course being Jewdar, we have a suspicion that Epstein had a little secret. In the first episode, Kotter asks “Oh, your father’s Jewish,” and Epstein tells him its his mother. Jewdar has a sneaking suspicion Epstein was really just a Jew, but adopted the Puerto Rican thing to seem tougher.