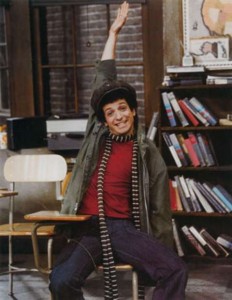 As a profession, acting, as a rule, sucks ass.  The vast majority of actors work erratically, for little recognition, and less pay.  And even those who are successful, who land the big role, often find that fame and fortune are fleeting.  Case in point, Ron Palillo.  For those unaware, Mr. Palilo, who died yesterday, appeared back in the ’70’s in a show called Welcome Back, Kotter, about a Jew who goes back to teach at his old high school in Brooklyn, and ends up in charge of the Sweathogs, the remedial group of delinquents that he’d been a member of.  Mr. Palilo was one of the said charges, the nerdy Arnold Horshack.  Certainly, Jewdar enjoyed the show back in the day (at least until Vinnie Barbarino left and the execrable Bo Delabar showed up), but now, as a fully licensed grown up, we also appreciate it as a cultural milestone.  As we noted earlier this year after the death of Robert Hegyes (Juan Epstein) Kotter was one of those 1970’s shows that gave full range to the possibilities of racial and ethnic humor.  Contrary to popular misconception, Horshack was not a Jew–he was at best “Jew-Lite,” (Jewdar’s term for those characters who skew Jewish, but about whom it is never made explicit).  But the show itself had two openly Jewish characters, both Kotter and Juan Epstein, and made frequent Jewish jokes and references (contrast with Head of Class–aka, the most antisemitic show in the history of TV–about a Gifted Program in a Manhattan public school which seemed to have no Jews).

For the run of the show, Palilo was a star, appearing not just on TV, but on lunchboxes, t-shirts, and the pages of Dynamite Magazine.  And then it ended, and so did his career, since nobody could look at him without seeing Horshack.  Things hit rock bottom in 2008 when not only did he appear on Celebrity Boxing, but got his ass handed to him by Saved by the Bell’s Dustin Diamond.

To be sure, Jewdar had plenty of schadenfreude over Palilo’s appearance, but that’s the nature of celebrity.  And as we extend our condolences to his friends and family, we’d like to remember him as Horshack.  It may not have been what he wanted, but for an actor, to be remembered for any role you played, much less one from over 30 years ago, ain’t too shabby.