No, Not That Kind of Shabbos Goy 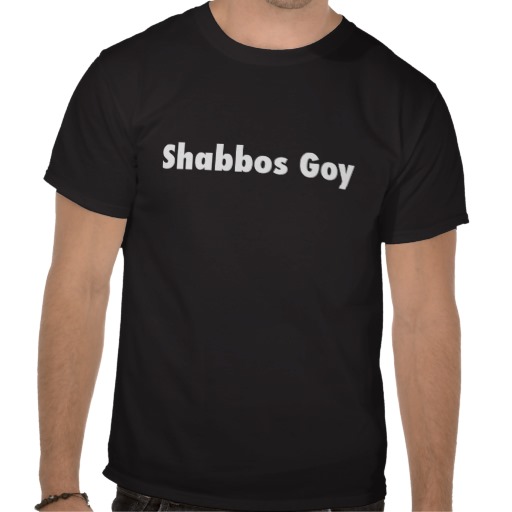 Jewdar was recently reminded of an old story we love.  A Chasid noticed that while everybody else cut their nails before going into the mikva, Reb Naftali of Ropschitz would cut his nails after leaving the ritual bath.  He figured there there had to be some reason why the great rebbe would do it this way, so he asked him. The Ropschitzer told him that in order to prepare himself for hearing this great secret, he would need to fast for two days, then immerse himself in the freezing river, and then Reb Naftali would tell him.  So the guy fasts for two days, dunks in the river, and then goes to see the rebbe, who takes him aside, leans in conspiratorially, and whispers “I cut my nails after going to the mikva, because they’re softer and easier to cut.”

A good joke, and a useful one.  Usually it’s the kind of joke made by non-Chasidim about Chasidim, but it has its applications to less observant Jews as well, which is why I was reminded of the story in the first place.  The New York Observer recently ran a story entitled:

“Give Me A Challah – Nice Jewish Goys: No Religion Required in New Shabbat Traditions – Lobster kugel, anyone?”

Now, when Jewdar first saw the headline,we thought this was one of two things:
1.  Something like a Faux Mitzva, in which people just think this is fun.
2.  Something like kabbalah, in which people think this is meaningful.
Either way, I was prepared to mock, but it turned out to be something else entirely–completely boring.
The story, such as it is, seems to be that there are people with a lot of non-Jewish friends, and they come over for Shabbos dinner.  But oh, it’s not boring Shabbos dinner like all the other Jews (many of whom also have non-Jewish friends  over for Shabbos dinner), it’s whimsical and artistic and hipster, it reimagines Sabbath traditions and imbues them with new meaning, etc. etc.
And this is where the story of Reb Naftali comes in.  Jewdar is a live and let live kind of guy.  Keep Shabbos, fine.  Don’t keep Shabbos, fine.   Keep Shabbos in your own way, fine.  But can we agree that not everything one does on a Friday night is automatically a “new Shabbat tradition?”  Let’s look at this:
“Of course, what counted as a d’var Torah had a very loose definition; in one notable instance,BlackBook senior editor Tyler Coates just read aloud the climatic scene from Sophie’s Choice. One night there was no food, and everyone just sat in a circle and took turns reading their favorite portions from the erotica collection Coming and Crying.”
This is a d’var Torah?  I mean honestly, if you’re going to read from a book about the Holocaust, you read from the one not just about shiksa, but a fictional shiksa?  And look, you want to read porn at the Shabbos tisch, we won’t lose any sleep, but no food?  A lot of things this may be, but Shabbos it ain’t.
And that brings us to our point.  There are a lot of things in this story, and some of it is Shabbosdik, and some of it isn’t, and some of the people are sincerely trying to do something for Shabbos, and some of them aren’t.  Ultimately, though, there’s a point at which Friday night dinner is just that.  I mean, if I go out for waffles late Saturday morning, does that automatically make it kiddush, as opposed to brunch?  Not everything that one does has to be imbued with meaning, not everything needs to be a reimagining of tradition.  Friday nights, the Big Little Jewdar complains about having to go to shul, the Little Little Jewdar brings some toy to the table and proceeds to play with it during Shalom Aleichem, which leads Jewdar to lose his temper, which leads Mrs. Jewdar to wish that both of us were a bit more mature.  These are things that happen again and again with the Jewdars; they are not, however, “new Shabbat traditions,” they are simply what we do.
Of course, there are lots of different ways that people relate to being Jewish–culturally, religiously, tribally, gustatorially–but that doesn’t meant that everything a Jew does has to have therefore have some greater meaning.  Like Reb Naftali’s nail-cutting, sometimes it just makes sense, or is easier, or is more pleasant.  Jewdar sincerely hopes that all the people featured in the story enjoy their Friday night get-togethers, whether it’s Shabbos or just the beginning of the weekend.  But we also hope that the next time it’s a slow news day at the Observer, they just do what other news outlets do, and run a story about how alcohol and chocolate are now good for you.