“Maybe I don’t have diseases. Maybe they have me.” — Mike Levine on Comedy, Contagions, and Dr. Seuss.

RSS
Books, Comedy, Interview
The first time Mike Levine graced the pages (well, screens) of HEEB it was back in 2013, for a 600+ word ode to his dysfunctional digestive tract. Since then, Mike’s been a welcome–albeit tragically infrequent–contributor to this publication, having delved into the etymology of ethnic slurs, and doctoring the script of movies he hasn’t seen yet, if only to bolster the bona fides of his favorite superhero. 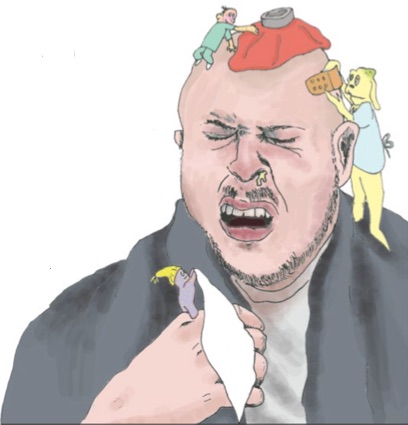 So what does he do when he’s not writing for HEEB?

As it turns out, quite a bit.

In addition to running a brutally funny twitter account, and contributing to both The Onion and McSweeney’s, Levine just published his first book, Oh, The Flesh You Will Eat!, out now from Devastator Press. In it, Levine assumes the role of acclaimed children’s author Dr. Vireuss, harbinger of vomitous joy to millions worldwide. Along with illustrator Jacob Vollum, Levine brings the suspiciously Seuss-y Vireuss to life with “three tales of merry maladies,” each inspired by Theodor Geisel, himself.

We checked in with Mike to get the lowdown on his latest project, hear what he has in store for his next book, and shep a little naches while we were at it.

The book is, in a lot of ways, a whimsical romp through what would otherwise be some pretty heavy body horror subjects. Why disease?

I’ve been fortunate enough to have a life with no outside threats to my body, so all my fears come from inside. We all know the fear that the weird lump on our ankle is a tumor, that our cough has a weird rattle to it, that no healthy body would produce that smell. I’m always picking at something, why not do it with words? Maybe I don’t have diseases. Maybe they have me. The notion that the smallest of us should still have a voice is all over Dr. Seuss, I just took it to the microscopic level.

What nailed the book for me was the unshakeable fidelity to Seuss’ style. You didn’t just make a few obvious A-B rhymes and call it a day, but went all out to replicate his phrasing, rhyme scheme, and even type formatting. What sort of research went into making the book?

Oh, it took weeks at coffee shops with a stack of Seuss, counting syllables on my fingers like a madman. I knew I didn’t want to do cover version, where I’d just swap out Seuss’ nouns for made-up diseases, I wanted a “darkest timeline” Seuss with the horror of real diseases. I did have to start with the classic “Congratulations! Today is your day!” just to ease readers in before taking that hard left turn. For the type formatting, that credit goes to my genius editors and also-genius illustrator, Jacob Vollum.

I’ve also worked with kids a lot, I choke up every time I read Oh, The Places You’ll Go!, and what was really important to me was hitting the same emotional notes. I can’t think of another book for children that tells them directly that they’re going to be lonely sometimes. That’s so powerful, and the honesty of it legitimizes the hot-air-balloon hope. 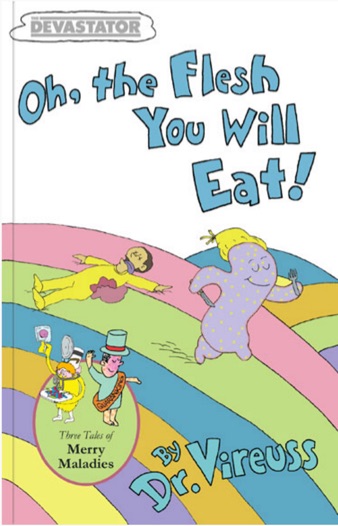 Oh The Flesh You Will Eat! the story was originally published in an issue of comedy magazine The Devastator (may its memory be for a blessing) – How did that get spun into a standalone book?

When I first got to LA, I was stacking chairs for a comedy festival, feeling like a real scrub, and The Devastator had a booth there. They called me over and pitched me on a book with the story that appeared in the magazine, plus the two additional stories that make of the book as it is now. I said “yes, a thousand times yes!” three or four times, then I went back to stacking chairs. I didn’t know it at the time, but Geoffrey and Amanda were hatching some major schemes.

The original piece was the back cover to their Apocalypse issue, every issue has something on the reverse side due to their commitment to making everything fun as hell. It got a lot of attention at comic book conventions because it’s bright, then familiar, then horrifying. To transition from the magazine to Devastator Press, which has an insane lineup of books coming out this year, I think they wanted a sure shot. Only in the world of parody books could something with a half-eaten child on the cover be considered a sure shot.

As committed as you seem to have been to duplicating Seuss’ verbal style, the Illustrations here are equally impressive, to the point that if you were just skim a picture, without really looking closely, you could easily mistake it for the real thing. What was it like working with [artist Jacob] Vollum? How did you two collaborate on this project?

Hours on gchat, gigabytes of reference images. I learned very quickly that clarity was absolutely essential, which I probably should have known already. The whole thing got me into writing comics, because the process of describing a page in an email and seeing it come back real is magical. I wanted every page to be a tripped-out smorgasbord of references and weird inventions, and Jacob was there to reel me in. Seuss can be busy, but he’s also sparse sometimes, and we wanted what worked best for the story. There’s plenty of Seuss references, but if you’re into easter eggs there’s also nods to JFK, Batman, Peanuts, and Leon The Professional.

When we first crossed paths, you were doing comedy in Chicago. Now you’re in Los Angeles – Has the change of scenery affected your comedy at all?

Other than everyone else in the coffee shop having Final Draft open, the biggest change has been meeting The Devastator crew and seeing people like me be highly effective, successful goofballs. I really look up to these people, and I’m slowly adjusting to seeing them as peers. I’m still looking for my voice as a writer, but this book feels like the right start.

Rather than simply pass these stories off as “lost” Dr. Seuss tales, you created a whole new character – Dr. Vireuss – as part of their genesis. How did he come about? Was he a character you’d been working on before all this?

Jacob came up with the name Dr. Vireuss for the initial piece, so it would look accurate. When it came time to flesh the book out, so to speak, I traced back the idea of who would write a motivational book for bacteria. Modern psychology tells us everything anyone does has to do with their childhood, so I came up with a boy whose imaginary friends were his very real diseases, and that being cured was the worst thing to ever happen to him. Once that core was in place, it was easy to find his view on humanity, doctors, or even the most benign rash. I never understood why anyone would refuse medical treatment, but Dr. Vireuss does.

Any chance we haven’t heard the last of Dr. Vireuss?

I do have a list of his other works in the book, and I’d be happy to write up “Cubs In Scrubs Forgot Their Gloves” or “Stomach Bugs Give Inside Hugs” given the chance, but I’m happy to announce my next book for Devastator Press. It’s a parody of terrible monologue books for young actors, and it’s called: All The Feelings: 13 Hella Dramatic Monologues For Thespians Of A Tween Age. 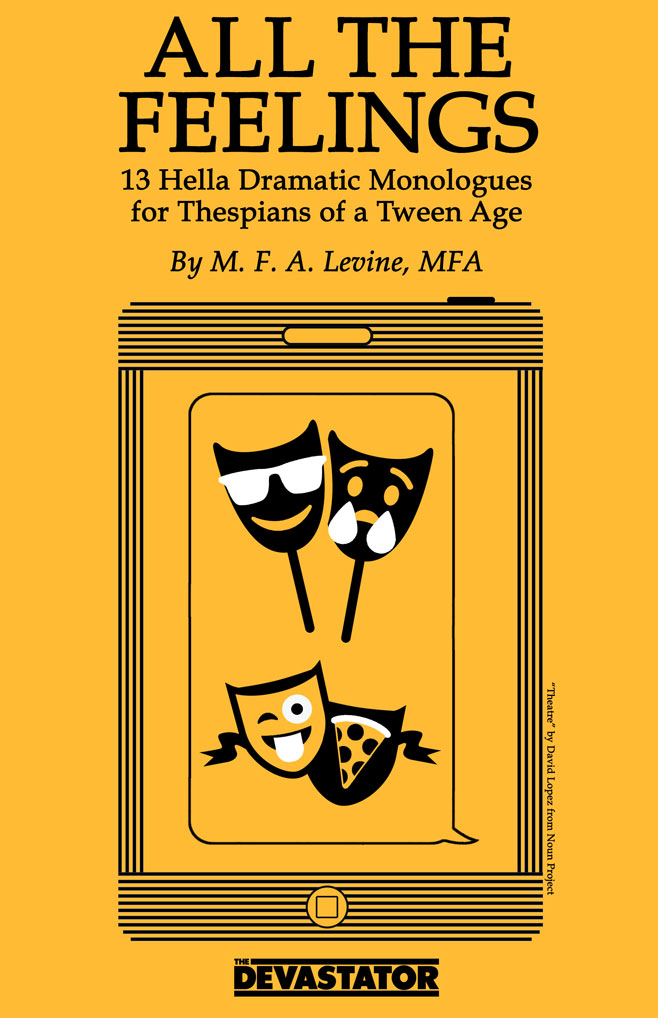 *****
Oh, The Flesh You Will Eat! is available now from Devastator Press.
For more from Mike, visit mikelevinecameupwith.com, and follow him on twitter.
*****