So, when it was her turn at the mic, she didn’t disappoint:

And, as the night progressed, Sarah – consummate roast pro that she is – seemed gracious and radiant while taking her fair share of potshots and punchlines, as well. Comedy!

But, it seems, all was not well in Silverman-land. During a recent visit on comic W. Kamau Bell’s talk show, Totally Biased, Sarah explained that she was actually, genuinely hurt by jokes made about…her age.

Pot calling the kettle black? Maybe. She does do a pretty good job at articulating why those particular jokes stung, and at no point does she call for anyone to have softened, or censored their roast performance. She’s just saying those jokes hurt. Fair enough, although I’m not entirely convinced you can have your racist, sexist, homophobic cake without eating your ageism, too. Still, she offers some worthwhile food for thought and you’d have to be a heartless piece of….wait a sec… what the hell is that around her neck? 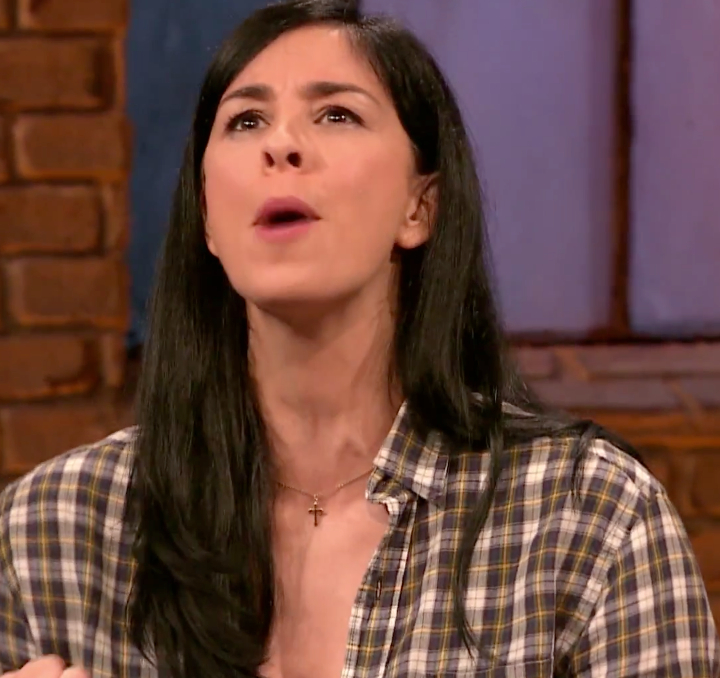 Sarah, I know you think Jesus Is Magic, but is that really who you’re going to turn to when someone calls you old?

What is going on here? Have we lost one of our favorite Jewesses to the siren song of the gentiles, or is Sarah just pulling legs/pushing buttons while lamenting her own buttons having been pushed?

If you haven’t checked the comments to this article, you may have missed some input from none other than Sarah’s Dad and Sister (yes it’s really them), who are here to set the record straight. I’ve written before about how awesome the other members of the Silverman clan are, and, once again, they do not disappoint.

Here’s her father, Donald, invoking Sarah’s long-since departed grandmother to get to the bottom of this mystery:

Close at his heels is Sarah’s sister, Rabbi Susan Silverman, with a (boob-centric) confirmation:

According to Sarah’s IMDB page, her next two projects are the comedies Gravy, and the Seth McFarland directed A Million Ways To Die In The West. Eagle-eyed movie-goers should keep an eye out for Sarah’s boob-pointing cross on the big screen

And, there you have it – Mystery solved. Thank you Silvermans! (“Silvermen”?)