Sarah Silverman is many things: a comic,  an actress, and a political activist, to name a few. But, according to a recent op-ed in The Jewish Press, Silverman shouldn’t be commended for what she’s accomplished, so much as admonished for what she hasn’t: Gotten married and had kids. At least, so says Rabbi Yaakov Rosenblatt. Rosenblatt, who has perfected the art of admonishing celebrities (here and here) sees Sarah’s career as the flawed result of her misguided decision to refrain from motherhood.

Scratching your head? Here are a few observations from Rabbi Rosenblatt:

You are in show biz. I am in the rabbi biz. You entertain people. I serve people. I believe I have your number. You will soon turn 42 and your destiny, as you stated, will not include children. You blame it on your depression, saying you don’t want to pass it on to another generation.

That medical reason for not wanting kids? Bullshit!

You said you wouldn’t get married until gay people can. Now they can.

You have made a career making public that which is private, making crude that which is intimate, making sensual that which is spiritual. You have experienced what traditional Judaism taught long ago: when you make sex a public thing it loses its potency…that is why you have had trouble forging a permanent relationship – the most basic desire of the feminine soul.

Watch out ladies! He knows your soul! 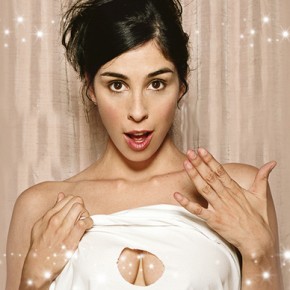 …for you, nothing is holy; in your world, nothing is permanent. Your ideology is secular. Your culture may be Jewish, but your mind is not.

I think you have latched on to politics because you are searching for something to build. There is only so much pulling down one can do without feeling utterly destructive. You want to fight for a value so you take your belief – secularism – and promote it. As an Orthodox rabbi, I disagree with just about everything you say, but respect your right to say it. All I ask, respectfully, is that you not use traditional Jewish terminology in your efforts. Because doing so is a lie. (EMPHASIS MINE)

And finally, the kicker:

Nothing you say or stand for, Sarah, from your sickening sexual proposal to a Republican donor to your equally vulgar tweet to Mitt Romney, has the slightest thing to do with the most basic of tenets which Judaism has taught the world – that the monogamous relationship is the most meaningful one and that a happy marriage is the key to wholesomeness.

Got that, folks? All of Sarah’s comedy, political activism, and overall success is totally antithetical to Judaism, and will continue to be until she gets married and pops out a few kids. It’s an absolutism of authenticity  in which orthodoxy is the sole model of a Jewish life. Any deviation, and you’re automatically in stark contrast to, what is in effect, Zero-Sum Judaism.

But wait! Just when we’d lost all hope, a ray of reasonable light comes bursting through the cloud of stink wafting off this ridiculous load of garbage. Who’s that with the very first entry in the comments section? Why, it’s none other than Donald Silverman, Sarah’s dad, who starts his reply with “Hey Rabbi Idiot”. Evidently, in the Silverman family, the apple doesn’t fall far from the tree.

We won’t spoil the fun, but the whole op-ed – and the ensuing comment section – is worth a look.