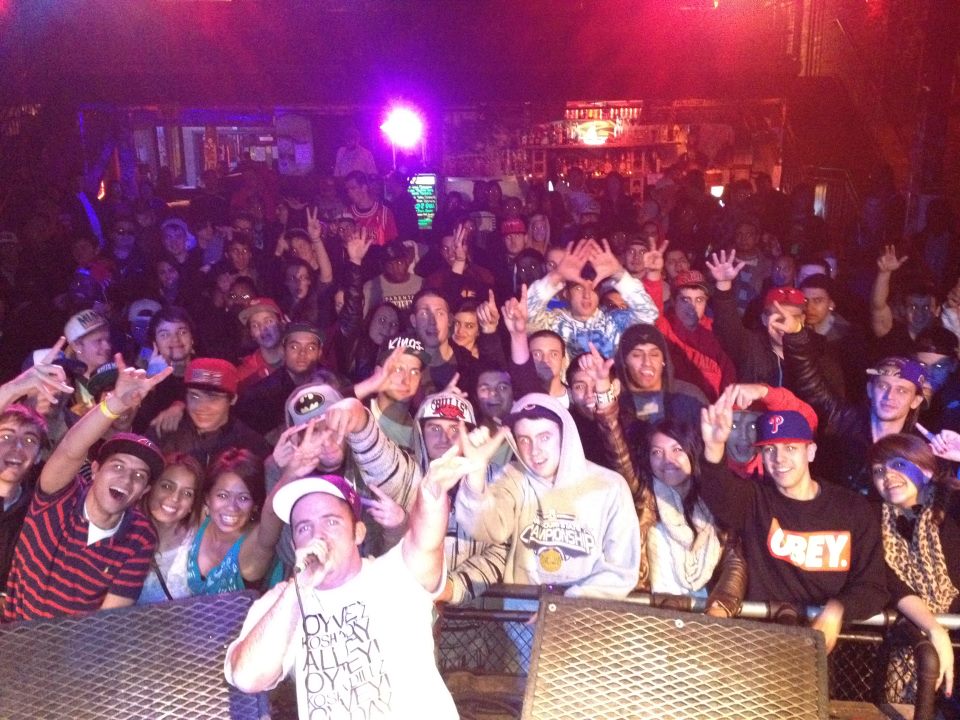 Jersey born, LA-based rapper Kosha Dillz is a hard man to pin down. I got in touch with him the day of his most recent concert in Santa Monica, while he was on his way to Ikea. Speakerphone and all, he took time out to talk to the press (always hustlin’) and a fan (he’s a mensch.) It’s no wonder he described his lifestyle over the last several years as “make friends and make fans.”

The Santa Monica concert may be his last for a little while. His current project is a documentary, Kosha Dillz is Everywhere, shot by Darah Goluv of Shalom TV  over what  appears to be years of Kosha’s tumultuous but fun-filled life. Kosha tells me the film features such notables as RZA and Mike Tyson. Now, like everyone with an idea but no $, Kosha’s set up a kickstarter for finishing funds to tell his story. All in all, playing BET Cypher, Rock the Bells, and scoring a song in a Superbowl commercial seems like a hell of a life, but while he is currently traveling the world and has toured throughout the US, things were not always so.

Kosha’s past include drugs and jail–and he was not quick to elaborate. (Though be did mention that the drugs he was doing are only now gaining popularity in black hip hop culture.) He is aggressively positive and looking to charm his audience, whether on stage or 1-on-1: At one point he successfully turned the conversation around, and I found myself describing my career aspirations to him as he fed me approval.

As such, he’s focused on the future and quite philosophical about his place in the rap game. He described his ethos as “express and encourage” being that he, offspring of two straight-up Sabras, is not the most likely hip hop star. “Until I rap on stage, I’m really introverted,” explains Kosha, adding that “I should have been a nerd, but I ended up in a street culture, rapping.” He is quick to point out that he is living every nerdy Jew’s dream.

According to Kosha, sometimes he takes shit for things he believes he should be getting ups for: Being pro-Israel, rapping in Hebrew, wearing a Star of David piece. He wants to make a “better name for the Jews” in hip hop. He sees the culture as something we aren’t really a part of, but which we love, though it might be pointed out that there are already plenty of hip hop heroes for any young Jew who dreams of rhyming, DJing or, probably, breakdancing–the Beasties, DJ AM, Drake. Hell, The Black Eyed Peas are yelling “Mazel Tov” and everyone and their dogs seem to be talking Black Bar Mitzvahs these days.

So where does a man who clearly wants to be taken seriously, but whose very name screams schtick, fit in?

This is part of the reason he’s making the movie, to show Jews and non-Jews alike that he sees himself as not only legit, but as creating something special that they should take a second look at. He’s trying to straddle a line between Paul Barman and Mac Miller, if that makes any sense at all. When discussing his relationship with Wu-Tang, for example, he explains that while they didn’t “discover” him, the fact that “they know he’s got bars” gives him a street cred he might not otherwise enjoy. Can’t a Jew get some love and still get silly once in a while?

We ended our interview discussing his list of influences, which varied greatly. Mostly he said his friends influence where his music goes, but for diversity of taste you can’t do much better than Green Day, Smashing Pumpkins and Metallica on the one hand and Biggie, Cam’ron and Wu-Tang on the other. We parted ways, as he leaned out the window to talk to a passerby: “Yo, do you know the way to Ikea?”