Even if you loathe klezmer music with every fiber of your being, it’s worth taking a look at Klingon Klez. Straight from the most wackadoo crevices of a nerdy, stoner rabbi’s imagination, this klezmer/funk sextet claims that its players are not actually Jews, but members of a famously antagonistic alien race masquerading as Jews—hence their outward appearance as a regular-looking human klezmer band. 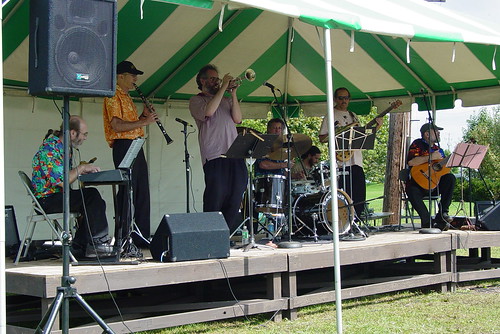 But unlike the Klingons of Star Trek canon (and certain klezmer artists as well,) Klingon Klez shows no sign of ill will toward humanity. Their mission statement makes it clear that their only agenda is to get their listeners to have fun—not too difficult a feat when you play under a genre called “space-age klezmer.” With their splashy track selections that meld traditional Ashkenazic folk with funk, Latin and electric elements, and have titles like “Mojo Shabbos” and “Hot Date in Zero Gravity,” anyone who doesn’t get a kick out of Klingon Klez has at least one stick lodged in at least one orifice. Without a doubt, these gentlemen have the market cornered.