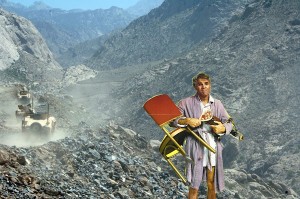 Who needs the Poconos for summer vacation? One American takes a 40-inch sword, pistol, night vision goggles and Christian verses to the mountains of Pakistan to track down Bin Laden. (L.A. Times)

A Hong Kong artist has drawn pictures of Star Wars characters in hipster-meets-high-fashion outfits. We’re just waiting for Chewbacca to appear in Louboutins and an American Apparel onesie. (TheDailyWhat)

Seems like only yesterday that the Mossad hit in Dubai was Israel’s biggest PR embarrassment. (HuffingtonPost)

Scientists plan to map out Ozzy Osbourne’s genome to learn how the hell he’s managed to stay alive this long.  (TheInternetToday)

A California man was beat up in a hate crime after his attackers learned that he was Muslim and not Jewish. (Mercury News)