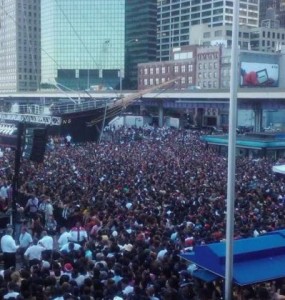 Drake was supposed to hold a free concert in Manhattan’s South Street Seaport yesterday in celebration of the release of his new album. Unfortunately, that never happened. According to The Awl, the hip-hop artist’s opening act, Hanson, were pissing their pants back stage over the crowd’s restlessness (attendees had been waiting for hours) and, more to the point, the venue’s overall lack of security.

So Hanson didn’t go on, and the waiting continued. Then some of the anxious kids started chucking lawn furniture at each other. As a result, the neighboring Heartland Brewery Restaurant and Pub had locked its doors, and, shortly after that, the concert was canceled.

Check out the video coverage of the below, courtesy of Smokey the Jew Bear.