What if aliens invaded… the President’s brain!! Rob Kutner, five-time Emmy winning Conan / “The Daily Show” writer ponders that question / fear in the form of SHRINKAGE, a four-issue sci-fi digital comic he is funding via Kickstarter, that will come out free via the Farrago Comics app. HEEB last encountered the cerebrally-obsessed scribe when we joined him in a limo along with

From what we’ve seen so far of the ingenious and hilarious concepts and characters bursting forth from Kutner’s cranium for his first comic book effort, and the appropriately over-the-top art by Marvel / DC veteran John Lucas, we can wholeheartedly recommend your shaking your shekels in the direction of their crowdfunding campaign.

I mind-melded with Rob about comedy, comics, and brains… mmm brains…

Let me get this straight: Tiny aliens invade the President’s brain, and a 3-½ Star General and a brain scientist “get shot right up the Most Powerful Nose in the Free World” to “ find and kill or be killed by the Nano-invaders!” How’d you came up with this nutty premise, and can you tell us a some more about where this story might be headed?

I’m obsessed with the brain. And when I get crazily into something, I try and make my creative projects take place in that realm so I get to play there and call it “work.” In this case, I thought, “What if you turned the alien invasion genre on its antennae and made them tiny but with an arguably even better way to conquer the Earth – through its most powerful man’s brain?”

As for where it’s headed…let’s just say there’s going to be excitement, terror, and lust – and that’s just in the amygdala! 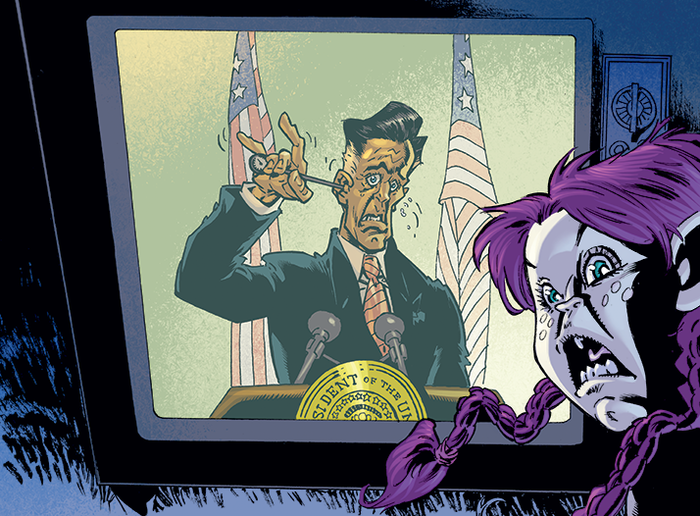 There’s a Dr. Strangelove vibe to crusty Cold Warrior Gen. Sturge McCrain. What creative influences come together for you with Shrinkage? Seems like a mashing up of comedy and Sci-Fi/Fantasy influences. Can you give some examples of that you think might have influenced this heady brew?

McCrain is definitely an homage to George C. Scott’s character General Buck Turgidson in “Dr. Strangelove”; the “precious bodily fluids” guy. Sci-fi and comedy are sometimes strange bedfellows, but when they work together they double each other’s reach, whether it’s “Ghostbusters” or “Galaxy Quest” or Warren Ellis’ “Transmetropolitan” comic.

Did you read comics growing up? Ever hide them in Hebrew School textbooks? If you could tell someone to buy five graphic novels right now what would they be?

I wish I’d thought of hiding them in Hebrew school books! A lot of my Hebrew School seemed to consist of learning to say Ashrei really fast – imagine if I was aided by the Flash. Yes, I fell for them in high school – just one more thing to aid my irresistibility to the opposite sex. The two that set me off were “The Dark Knight Returns” [by Frank Miller] and “Watchmen” [by Alan Moore & Dave Gibbons],  but the ones jazzing older-me’s cranium are Brian K Vaughan’s “Y: The Last Man,” Charles Burns’ “Black Hole,” and any of the collected volumes of Mike Carey’s “The Unwritten.”

Did you always envision Shrinkage as a comic? What’s unique about writing for comics as opposed to the other mediums you work in?

Yes. The crazy visuals and weird meshing of political satire and sci-fi and comedy would be hard for any other genre to envision as easily. Or at least, any other genre experienced sober….

What was the first thing you wrote that made people laugh?  What made you decide to go pro?

In junior high, I used to make one-panel cartoons that were ripoffs of “The Far Side,” and sneak them around. I got one friend who started rating the various efforts on, for some reason, a 1-7 scale.

One day in college,  I looked around and realized everything I was doing extracurricularly (and possibly curricularly too!) was comedy-related. I applied for a Mad Magazine internship and didn’t get it – but the process of putting together the submission won me over to “I should be doing this from now on instead of, say, finishing my Thesis.” Blecch!

What’s your process like? Do you keep a notebook handy to remember funny things that happen or that you think of?

I put ideas in the “Notes” app on my iPhone, so my ideas are always with me until they get destroyed by a Salieri-like toilet jealous of my genius.

Shrinkage is all about the brain. It seems to be etting and subject wrapped in one. Where did your fascination with the brain stem from?  Are Jews more prone to obsess about the brain than others?

Yes, that very bad Jew Sigmund Freud was obsessed with what naughtiness our brains were hiding, and I think I am, too. I think it’s amazing that we know so much at a molecular level what’s “occurring” in our brains but so little about what that means – that we have something called a “functional MRI” that can tell us nothing about the dysfunctional. 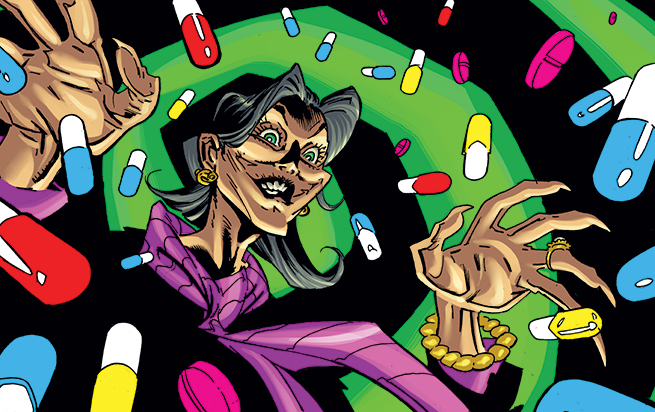