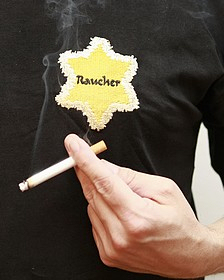 Just when you thought you weren’t going to get anything for Yom Hashoah, along comes John Raese, the GOP’s senatorial candidate for West Virginia, who, in defense of smokers’ rights, offered the following:

This is such an embarrassment of riches, we’re not sure what exactly to say about it. Is it the utter pettiness of the issue in comparison to the analogy (though apparently, Raese’s not the only one to make the connection)? is it the incoherence of the analogy itself? Is it the fact that that Raese, despite claiming to believe that everybody has the individual right to do what they want to do, actually does want some smokers (albeit not of tobacco) to go lose their freedom? Who knows, who cares–whatever you want to say about Raese and his quote, he’s got impeccable timing, coming up with his little diatribe not only on Yom Hashoah, but due to a certain amount of harmonic convergence, allowing us to run with it today, on Hitler’s Birthday (and as if that wasn’t enough, the Bishop of Peoria gave us another his frenzied fuhrer feuilleton). Life just keeps getting better and better.. Freilichen Geburtstag, Adolf.