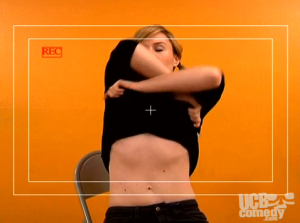 Every year when Holocaust Remembrance Week roles around, there’s one special lady on everybody’s minds. No, not Eva Braun. I’m talking about the one that would give all Jewish girls between the ages of eleven and fifteen the the chance to star on the community theatre stage.

Yes, Anne Frank is one of those roles that every young actress dreams of playing. As a Ginjew, the Ginger in me always wanted to be little orphan Annie (alas, I never got the chance), but the Jew in me yearned to play the title role in In Diary of Anne Frank. All this time, I thought it was my red hair that was keeping me from nabbing the part, but it turns out, I just needed to show more boob. (Now that I think of it, maybe that was my problem with Annie, too.) Thanks for teaching me how it’s done, Bobby Chicago.