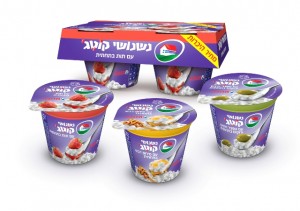 Given that the Jewdar family is about to make a trip the Holy Land for the elder Jewdar boy’s bar mitzvah, we have been following with some interest the recent controversy over rising cottage cheese prices. Still, we just figured it was part of the global recession, rising food prices, etc, until we saw this week’s Forward, with its discussion of the hallowed place that cottage cheese has in Israeli history. Now, Jewdar is from Wisconsin, so we like us some dairy products. But we’ve spent some fair amount of time in Israel, and while we recognize cottage cheese’s popularity, we can think of some other foods that more define the Israeli diet. And then it hit us–this whole thing was just an ingeniously orchestrated effort on the part of the Israeli Information Ministry, which, going back a year, has been looking for ways to convince people that Israelis don’t eat just sit around eating hummus. So they create this whole crisis, plant these stories, and make people think that Israelis are obsessed with cottage cheese, not hummus.  Or perhaps this is all just Jewdar’s wishful thinking that Israel’s PR people were clever enough to come up with some kind of stunt like this for something that actually matters.