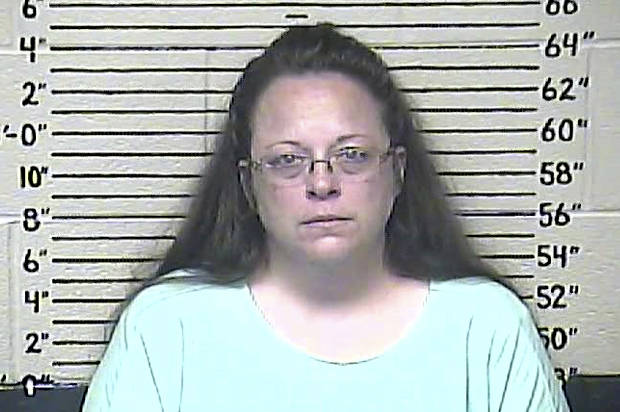 As readers know, Jewdar is not a fan of America’s crybaby culture.  Nor do we care for people who don’t do the job for which they are being paid.  To that end, we have no sympathy whatsoever for Kim Davis, the Kentucky clerk currently serving a sentence for contempt of court for refusing to issue marriage certificates due to her opposition to same sex marriage.

So here’s the thing.  We don’t object to her objections to same-sex marriage.  While that might be seen by some as the height of intolerance, the reality is that for pretty much all recorded history, and in pretty much all societies, same-sex marriage has not only not been allowed, but when considered, viewed as abhorrent (to clarify, while some Native American societies did allow marriages between people who were biologically the same sex, they involved men who were considered to have the spirits of women, and thus were more correctly transgender rather than gay).  So while Jewdar has no problem with same-sex marriage, we also don’t have a problem with people believing that it should not be legal.  And we would say that critics of the current intellectual climate do have a point that for many, the old Voltairean ideal of “I disagree with what you say but I will defend to the death your right to say it” is no longer enough.  People should be free to believe whatever they want.  But what Kim Davis and her supporters are demanding is not a matter of belief; it is a matter of practice, and it stems from the fact that too many evangelicals feel a sense of entitlement when it comes to America, believing that this is their country, and the rest of us have to accommodate them.

Now Jewdar is, of course, a God-fearing man.  But we have no delusions of grandeur on the subject.  Our beliefs are just that–our beliefs.  To be sure, we believe that where possible, businesses and governments should make reasonable accommodations to those beliefs that still allow one to do the job properly, as was surely intended by our Founding Fathers.  The key here is “reasonable,” and, of course, “do the job properly.”  If Jewdar were applying for a job as “weekend shift manager,” we couldn’t expect to be given Saturday off.  If we were applying for a job as a bologna taster at Oscar Mayer, we couldn’t claim that we should be given an exemption to only eat kosher food.  If we were interviewing for a position as a gay porn star, we couldn’t insist that all our male partners be our wife, digitally retouched.  And if I already had that job, and suddenly found God, I couldn’t expect to keep it.  And if that’s true for private sector jobs, it’s doubly true for someone like Kim Davis.  She is an elected official.  She was elected by the people of her county, to work for the people of her county, some of whom are gay, and would like to get married to one another.  She was elected by them, and swore an oath which included the following:

...”will faithfully execute the duties of my office without favor, affection or partiality, so help me God”

So here’s the thing–as a good Christian she’s not supposed to take the Lord’s name in vain;  swearing to faithfully execute the duties of her office without favor or partiality and then choosing to faithlessly abdicate her duties due to her religious beliefs is a pretty clear violation of the Third of those Ten Commandments that good Christians claim to revere so much.  Now, how her supporters might say that the reference to God in the oath suggests that she needs to follow her religious beliefs.  This is, of course, a false choice, because if she really and truly feels that her religious beliefs prohibit her from properly fulfilling her responsibilities, the proper recourse is to quit her job, not simply quit doing her job while getting paid.

And that’s why this business about her being a “martyr” is such nonsense.  She’s not a martyr, she’s spoiled.  Conservatives, who are supposed to value integrity and honor and hard work, and condemn government waste, are essentially celebrating her for demanding the right to get paid for a government job she’s not doing.  If she were truly a woman of integrity, she would have quit her job.  Instead, she is making the traditional claim that she is entitled, as a Christian, to do whatever she wants, and that we need to accommodate to her; that the citizens who elected her should be penalized because she objects to doing her job, but still wants to get paid for it (and that’s why shouldn’t get bail; this is not the case of someone claiming to be innocent–this is someone who is not only proud of breaking the law but who is kept from breaking it further only by keeping her in jail).

Kim Davis is not being persecuted because she’s a Christian; she’s being punished because she’s refusing to do her job, and to obey the court order telling her to do her job.  Kim Davis’s conservative supporters are right about one thing–this has a lot to do with values.  But what are those values, exactly?  One side of this argument believes that elected officials should be able to violate their oaths of office and get paid for a job they aren’t doing.  One side doesn’t.  Guess which ones are the conservatives.