[EDITOR’S NOTE: With the High Holidays are safely in our rearview, it’s time we look back and took stock of the year that was. Over the coming days we’ll be sharing our favorites from 5774, giving us all the opportunity to enjoy a little insta-nostalgia before we go about with our 5775 lives. So get comfortable, relax, and enjoy our look back at the best of 5774. First up? Our Literary Editory Judith Basya shares her favorite books of the year…]

Welcome to my list of 5774’s top ten Jewish-ish books! You’ll probably notice the skew towards female authors so let me explain. It was a good year for reading. Literary and cultural merit combined with my personal preference for sarcasm, satire and unreliable narrators only whittled it down to twenty-five. Then the National Book Award committee announced its 2014 non-fiction nominees, and lo and behold: nine men, one woman. Their fiction nominees comprised a more balanced list, thankfully, but by the time it was released the next day, I’d already decided on my ten (approximately) and moved on to the clamber of putting them in some kind of order. As if I wasn’t already racked with guilt over the cuts. Who am I to judge? Yet Heeb pays me to judge.

Best Book by One of My Favorite Authors: Casebook by Mona Simpson

Talk about a good year for reading: not only did Mona Simpson come out with her sixth book, it features a half-Jewish protagonist, allowing me to include it here. Miles Adler-Hart is the son of a familiar Simpson character, a woman who puts too much stake in her fantasies, and he’s both drawn to and distrustful of her boyfriend, another Simpson regular, the slippery, peripheral dude. If I’ve made the novel sound like an ill-considered romcom, far from it (though perhaps that explains the dream I had last night about Simpson being disappointed in me). “The Mims,” as Miles calls her, is a wise person who makes a few foolish yet, thanks to the author’s spare, colloquial storytelling, explicable, sympathetic mistakes. The child’s perspective and his employ of a detective will remind fans of Simpson’s earlier work. This time, however, the kid is funneling his life into a future bestselling comic book, and minimalist footnotes raise questions of his veracity–making Casebook like nothing she’s written before. 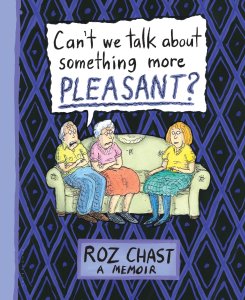 Chast’s account of her elderly parents’ decline and demise had me mourning less for them (though I’m certainly sorry for her loss) than for Joan Rivers and Nora Ephron, her late compatriots in skewering guilt. Which in turn contributed to my dismay that Chast is the only woman in the National Book Award’s non-fiction sea of male–even as I celebrated the first-ever nomination of a cartoonist in an adult category. Also the only memoir amidst histories and biographies (mostly of men), I’m pretty sure that Can’t We Talk has the widest appeal of them–it’s for anyone with parents.  May the best woman win.

This 600-pager includes the When Harry Met Sally screenplay in its entirety, but more importantly, it features some of Ephron’s 1970’s journalism—a reminder that she wasn’t just a smart, witty essayist/novelist/screenwriter/playwright but an accomplished investigative reporter, too. (Back when the climate for women was even worse.) 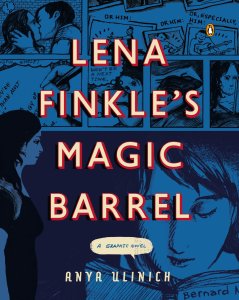 She writes and she draws: the author of Petropolis combines her talents to bring us Lena Finkle, a Russian immigrant, thirty-something mother of two who finally gets to explore her traumatized sexuality and naive romanticism after ending her marriage. Though she chooses men as disastrously as Dunham and friends, this Lena has maturity and life experience behind her perspective, hence Ulinich wins in a broader category than the “screwed-up sexuality” awards below. Kudos especially for the middle-aged trust-fund miser homme fatale.

A painter flees his religious family in Brooklyn and lands in Europe…. right around the beginning of WWII. As a historical novel, Fugitive Colors offers a fascinating account of the Nazi attempt to “purify” art (when they weren’t busy purifying the population). As an epic thriller, former Jerusalem Post editor Barr’s fiction debut keeps the pages turning by killing off the good guys and steadily upping the evil. Extra credit: how many blurbers who’ve written for Heeb can you spot on the back cover?

Imagine Kafka on Prozac: Galchen loves the ironic parable, yet writes with a sense of humor rather than hopeless despair. Though these stories each claim a connection to a classic such as Thurber’s “The Secret Life of Walter Mitty” or Gogol’s “The Nose,” they also function as a personality test. My favorites are “The Lost Order”, about a woman who tries to deliver takeout to a wrong-number caller, and “Once an Empire”, in which a woman’s belongings want to leave her. What does that tell you about me? More than you need to know.

Shteyngart details his journey from meek Russian asthmatic to brash New York author with the same acute wit that propels his novels, fortunately, because if your mother nicknames you “Little Failure” and you go on to pen sardonic bestsellers, that trajectory is hardly a stretch. Fortunately also because there was room for one man only, and the narrator I could most relate to (minus the fame and fortune, obviously) triumphed.

OK, one more dude because I just remembered how hard I laughed at this satiric yet poignant tragicomedy about a third-generation-post-Holocaust family’s implosion. Grandma makes macabre jokes, Dad has sexually-desperate groupies, Mom’s an alcoholic, the sisters are sadistic bullies, but if you went to high school you’ll relate. Read our exclusive excerpt here, and watch for this book to be republished in 2015, hopefully this time with the PR it deserves.

Best Intertwining of Gay Themes with Israeli Politics: All I Love and Know by Judith Frank

An inter-partnered gay couple gains custody of the Jewish half’s Israeli niece and nephew after the kids’ parents are killed in a terror attack. Don’t be fooled by the earnest title: Frank covers a vast terrain with a deft touch, and the occasional amusing set piece highlights how honestly the central characters are rendered.

Best Wild Ride: A Highly Unlikely Scenario or, a Neetsa Pizza Employee’s Guide to Saving the World by Rachel Cantor

In this roller-coaster debut, fast-food corporations rule the world and a peon customer-service worker has to save it. There’s time travel, an indecipherable manuscript, medieval mysticism, Marco Polo, but since I don’t smoke pot during work hours, that’s the extent of what I can coherently convey. Cantor is in control of her material, and successful dystopian satire makes more sense while you’re lost in it.

A teenage boy from the suburbs of San Fran goes to Brooklyn (this is a millennial tale, after all), where he finds his place on the gender spectrum by pretending to be trans to win the heart of a lesbian. Schrag published graphic memoirs in high school and wrote for The L Word; Brooklyn-coming-of-age-sexual-angst genre notwithstanding, her first novel is refreshing and relevant.

Best Screwed-up Sexuality upon Escape from a Religious Home: Cut Me Loose: Sin and Salvation After My Ultra-Orthodox Girlhood by Leah Vincent

Vincent’s escape from ultra-orthodoxy is in many ways a familiar story: small, innocent transgressions bring down draconian restrictions, leading to more transgressions until her family casts her out. But. The portrait she paints of emotional desperation and sexual self-harm is annihilating. If I were a high school principal, the chapter in which she offers herself on Craigslist without the wherewithal to negotiate a price would be required reading.

The UnAmericans by Molly Antopol

The Secret Lives of Married Women by Elissa Wald

A Replacement Life by Boris Fishman

Panic in a Suitcase by Yelena Akhtiorskaya

The Lion Seeker by Kenneth Bonert

A Guide for the Perplexed by Dara Horn

A Bintel Brief: Love and Longing in Old New York by Liana Finck

The Harm in Asking by Sara Barron