Will This Knight Be Different From All Other Knights? 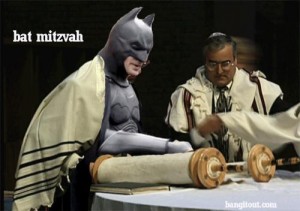 As assorted readers are doubtlessly aware, DC Comics, the venerable Jewish comic book company (is that redundant?) is in the process of relaunching its universe. Now, Jewdar, traditionalist that we are about such things, is not necessarily thrillsville with the notion of tinkering with the classics. But as long as they are going to do it anyway, there is something they might want to consider.

Although there are those who babble on about how “Jewish” this or that comic book character is a Member of the Tribe (“Superman believes in justice, that’s a Jewish value!”), Jewdar likes his Jewish characters to be a little more explicit (there’s a reason we’re not called “Mediterraneandar.”) Traditionally, Jewish characters in comics were one of three kinds:
1. Non-existent: We could give DC a little slack, since Metropolis, Gotham City, etc. aren’t real. But the Marvel Universe is set mostly in NYC. Simple statistics suggest that a random sampling of white New Yorkers should be pretty Jewlicious. Kitty Pryde doesn’t cut it (and she’s from Chicago, to boot).
2. An irrelevant afterthought: The Jewish characters are either B-listers, or, when a major figure, it’s completely unmentioned, until they have the issue where it is (like the Thing, who used to visit his old neighborhood on Yancy Street all the time, suddenly having an emotional reawakening of his Jewish identity forty years after the comic started running).
3. Absurdly ghettoized caricatures: Saintly rabbis, earnest Israelis (anyone remember Sabra?) and heroes who are living embodiments of King David, the Maccabees, the Second Avenue Deli, etc. etc.

So while we’re not Thrillsville about eh DC reboot, we do think this is a great opportunity to throw a little bit of the Tribe into the mix. Now, Superman is from another planet, Wonder Woman is a creation of the Greek gods, and that leaves of the Big Three just one, Batman, whose relaunch is happening today.

And really, it’s a pretty logical choice. Back in the 1930’s, it made some sense for Bruce Wayne, scion of one of Gotham’s finest families, to be a WASP. But look around NYC and see whose names are on the hospital, university and theater buildings. Don’t get us wrong…Batman has to be named Bruce Wayne. But who’s to say he wasn’t named after his great-grandfather, Baruch Wien?