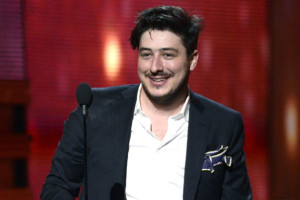 Mumford and Sons was already a very popular band, but in light of its Album of the Year Grammy win this past Sunday, it would appear that not only do the masses appreciate its formulaic, arena-sized bluegrass/ indie rock, but that the foursome, led by Marcus Mumford (pictured here on the left. That’s not Brendan Frasier), has also achieved industry-wide validation. It’s a strange thing, witnessing a British band appropriate and popularize such an inherently American sound to the extent that, to many, they could have ostensibly invented the banjo.

But the weirdest thing about this band is not its sound (predictable and redundant), nor is it its fashion sense (moustaches, vests, sleeves rolled up, hairy forearms). Rather, it is Mumford’s enormous popularity with Jews. Now before I elaborate, I must admit that I cannot substantiate this assertion with cold hard data. I can only tell you that the other night at the Barclays Center when I saw Mumford and his buddies (no, Mom, they’re not actually his sons), I saw a lot of yarmulkas. Enough yarmulkas to recruit for both a maariv minyan and a few breakaways. Why would so many Orthodox Jews be in attendance of a show that’s not Matisyahu? Why is it that I personally knew nearly a dozen Upper West Siders in attendance who, of course, had dined at the trendy kosher Brooklyn restaurant Pardes beforehand?

My friend sitting next to me had the same question. I posited that it must have been the location – Brooklyn’s Barclays Center, with its proximity to Borough Park and Flatbush, coupled with the fact that the arena has a delicious kosher food stand. He countered that he had been to a few shows there already, including Jay-Z and Bob Dylan, and was certain that the Semitic count had not been this high.

A few days back, Tom Breihan of Stereogum wrote a backhanded defense plainly titled “In Defense of Mumford & Sons” in which he writes :

“Of course, I can understand the general indie-rock annoyance of Mumford & Sons; they do plenty of annoying s***. They dress like a**holes. They write vague and portentous lyrics that hold up to absolutely no scrutiny.”

Remember, this is in defense of them.

“But virtually every one of their tracks has a grand, dramatic, clothes-rending, chest-beating climax.”

And he’s right. They all do. In fact, almost every song in its Barclays’ setlist employed this tactic, which also made me wonder whether they were playing the same song over and over again or not.

Breihan doesn’t mention, however, that Marcus Mumford, who is a full blown bluegrass revivalist, admittedly stumbled onto the genre he’s popularizing via the O’ Brother Where Are Thou? soundtrack. You know the one. George Clooney had a hit song on it.  Now, it’s not nice of me to employ that fact as a right hook to the credibility of the band. For all I know, Marcus Mumford, Ben Lovett, Winston Marshall, and Ted Dwane have spent the last decade immersed in obscure Americana folk records. They may have become so well versed in our nation’s oldest cultural traditions that their recordings could fool even Harry Smith himself. But, ultimately, they’re still four kids from West London who are co-opting a sound to which they have no inherent link. Their sound is one of appropriation, like they’d seen a vintage painting in a thrift shop and hung it on a wall, out of context and without resonance.

Now, take a leap with me. A big leap. This leap…it’s kind of huge.

For many of us, as Jews connected to this country by as little as a generation or two, we can understand the notion of taking on a new identity, whether or not that identity is really ours, or simply borrowed. In a sense, over the last few generations we, as a people, have assimilated, not necessarily in a religious sense (that, too), but by fitting very naturally into the make-up of this nation. Maybe that’s why when we, as the Chosen people, watch a band like Mumford & Sons as it succeeds in taking on a sound that was never intended to be theirs, we can relate. Call it appropriation, as I did before, or call it dressing up, but however you label it, it’s a knowing that no matter how hard we try to do something–and we always do it well–it’s still not quite ours.

Sure, there will always be someone to criticize that–in Mumford’s case, it’s the critics. In ours, it’s, um, everyone…? And sure, it’s probable that I’m over-thinking this (yet this is what happens in my head most of the time) but as Marcus Mumford won a Grammy for piggybacking on a legacy, I wonder – is it really so weird for a bunch of British guys to play bluegrass? After all, look at what we’ve accomplished. We’ve probably won like, dozens of Grammys.

On the other hand, my wife posits that the affinity stems from the fact that Mumford is catchy and they kind of dress like old European Jews. She’s probably right.