What To Do With Yourself Now That Christmas Is Over 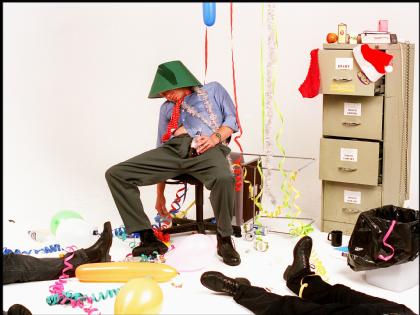 December 26th – The day things slowly start getting back to normal; Snow is, once again, a pain in the ass, not a cause for whimsy; Strangers on the street aren’t quite so friendly anymore; And cashiers don’t seem to care if you have a good day or not. Yes folks, the Christmas spirit has come and gone, and everyone – Jew and Gentile alike – can finally get back to their usual grouchiness.

For some, though, the post-Christmas reentry is a little rockier than for others. Even Jews, for whom Christmas is, at best, an opportunity to surf the wake of someone else’s holly jolly goodwill, can find themselves wanting more. For that subset of Jews who fetishize the alternate reality of Jews owning the streets on Christmas eve, well, it’s no huge surprise that they’re in for a letdown when things get back to normal.

And so, if you find yourself wandering listlessly, babbling incoherently, and generally being a waste of space now that Christmas is over – here’re some things that might help.

So what if Christmas is over? Quit being so provincial. There are  plenty of other holidays out there to latch on to. Take, for example, Maghi: the Sikh holiday commemorating the sacrifice of the forty “soldier-saints” at the battle of Muktsar. It’s coming up in mid-January. Think of it – who needs Christmas sweaters when you could wear a dastar instead? “It’s not offensive” you’ll rationalize to yourself “it’s an ironic homage!” Just remember, no matter how much you armor yourself in questionable layers of self-effacement, deep down you just wish that you too believed in something… anything.

Christmas isn’t on a calendar, it’s in your heart.

Here’s a fun fact: Did you know that you can eat Chinese food and see a movie literally any day of the year? It’s true! If you wait all year for Christmas eve as your excuse to see other Jews at the Megaplex, you might also be interested to know that you could pick up your telephone, call some Jewish people you know, and go see a movie right now.  When you have Christmas in your heart, anything is possible.

But, if you need the scheduled comfort of a calendar day, you’re gonna love…

Whoa. Bet you didn’t know Christmas falls on January 7th this year, did you? Well, for Eastern Orthodox Christians it does. So, if you’re absolutely incapable of defining your Judaism other than in contrast to someone else’s faith and tradition, here’s your spiritual mulligan. Use it wisely.

Okay, so I haven’t exactly checked with any rabbinic authorities on this one, but I’m gonna go ahead and give you permission to stretch Hanukkah a few days further. It’s already eight nights long, it’s not like another day or two is gonna hurt, right? If anyone gives you grief, just say you’re celebrating “non-consecutively.”

No idea what this is. Maybe you go out and punch people? Try it, and let me know if I was right.

So, there you have it: A few helpful hints to help with the post-Holiday blues. Merry Maghi everyone!