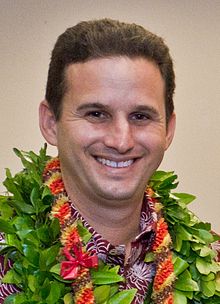 A few years ago, Jews in the Senate were riding high–with 13 members, the Senate would even recess on Rosh Hashana.  It seemed like nothing would stop us from eventually becoming a majority.   Then came 2010, and even though we gained Richard Blumenthal,we lost Russ Feingold (not a great trade, in Jewdar’s book), and this year, we lost two seats with retirements both from Herb Kohl and Joe Lieberman, and Jewish candidates in Ohio and Nevada both came up short.  And let’s face it, a lot of the senatorial Semites are no spring chickens.   Was this it?  Were the golden years behind us?  Maybe, but as we’ve shown again and again, just when you think the Jews are down for the count, they manage to get off the mat. In this case, with the death of Senatorial Badass Daniel Inouye, Hawaii needed a replacement, and yesterday, Governor Abercrombie announced his choice–Lieutenant Governor Brian Schatz.  In case the nose, hair, and Asian-American wife aren’t convincing enough, his Facebook page lists him as a Member of the Tribe.  Although he still has to run again in a special election, we presume that he’ll win, and, at only 40, he should be representing Hawaii for a long, long time.