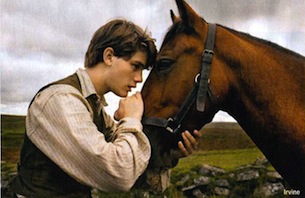 When it comes it comes to Spielberg, I am incapable of irony. I just can’t do it. In fact, the other week, I caught E.T. on the ABC Family channel and I was genuinely moved despite having seen it many times over.

So when New York Magazine’s Vulture blog pointed out that the trailer for Spielberg’s forthcoming film War Horse was just released, I watched it instantly. And despite a YouTube commenter snarkily dismissing it as “Saving Private Sea Buscuit,” I was getting a little teary.

Maybe it’s because I’m a new dad. Maybe it’s because my dog is away with my in-laws for a couple of weeks and so, the trailer is tapping in to the man-animal bond. Or maybe it’s something as calculating as John Williams’ sweeping score. Who cares. It’s about a kid during World War I who bonds with his horse and it’s directed by Spielberg and I’m sold. All I’m saying, though, is that horse better not die at the end or I’ll be bawling.

And now the trailer: