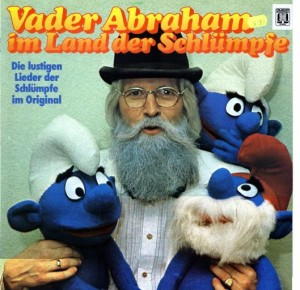 I’m assuming that Vader Abraham is the guy on the cover of this obscure vinyl 45″, but why is he singing love songs to oversized Smurfs? Is he supposed to be Hasidic or just a creepy old German? We all know that the Smurfs were an anti-Semitic race of four hundred little blue men and one blonde chick living in constant fear of a Jewish giant named Gargamel, but where (someone please help us out here) oh where the fuck does Vader Abraham fit into the picture? A close examination of the cover art reveals Vader holding these giant Smurfs by their vital pressure points and even fearless Papa Smurf looks worried. The record was made in 1978, and we can only pray that Vader Abraham has since left the little blue guys alone, joined some kind of twelve-step program, and stopped making records.
SEMITIC ONE