Thought Catalog Is Not BullS*%T

[Editor’s Note: Before you read any further, just know that, well, this defense of Hitler actually happened]

Unlike most of the rest of the world, I do not see Thought Catalog as the “personification of bullshit” or the most “bullshit” website that has ever existed.

Thought Catalog is simply a website like many websites today. And just like almost all websites today, its actions are defined by a core belief, greed, ego and a certain love for the pageviews it needs.

“Who cares about a technical definition? What Thought Catalog did was BULLSHIT!”

Publishing an article defending Hitler? That must be bullshit, right? 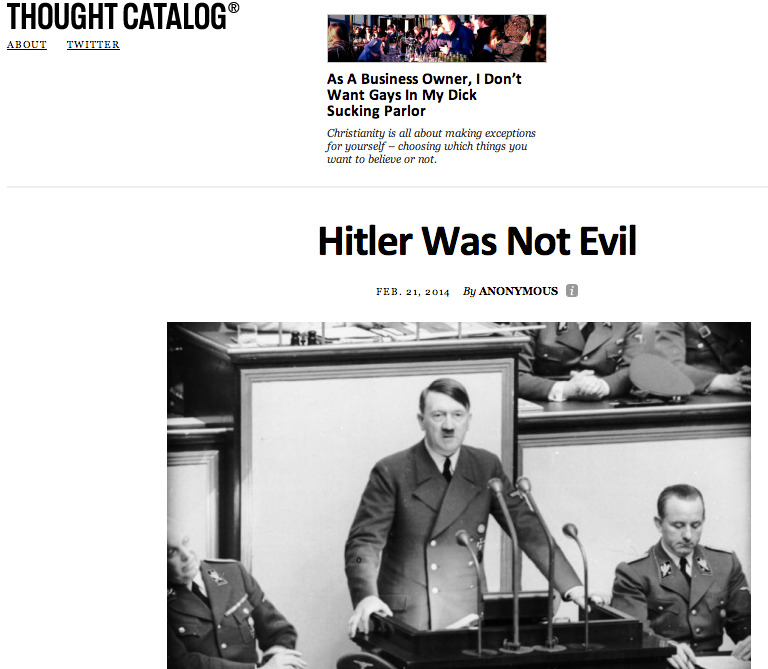 As I just said, no website does anything without a reason. And like I just said, any website’s actions are triggered by its own ego, greed, and core belief.

These all came from its belief.

“Its beliefs are BULLSHIT!”

Like I just said, we define something as bullshit when this something does not agree with our moral standards.

Web users quickly defined inane rambling “think pieces” as bullshit because they hate inane rambling think pieces. “Anonymous” morons [Actually, looks like the original author is a one C.K. Bachman] who write terrible social studies essays defending Hitler do not pass the “wait, what the fuck is this garbage?” detector imbued in anyone with a pulse. And because they does not, they are defined as “laughable” and “bullshit”.

Now in retrospect, can they really be defined as bullshit? No.

And as a writer on the internet allow me to assure you, when compared to the onslaught of idiotic “Which Disney Princess/College Mascot/Kitchen Appliance Are You?” quizzes, the bullshit at Thought Catalog can be considered merciful.

“But Thought Catalog brings misery to everyone who reads it! It is bullshit!”

This might be what the more persistent readers will be saying/thinking.

Perhaps why the perception of Thought Catalog being bullshit is so deeply rooted in so many peoples’ minds is that after we all got sick of making fun of Upworthy headlines, we needed to have a focus. Buzzfeed and Huffington Post perhaps are not remembered as completely bullshit because in the last few months, the average web user sought ephemeral distraction on their Facebook news feed, and both Buzzfeed and HuffPo gave us all a laugh or two. This left Thought Catalog.

So naturally, Thought Catalog gets the put in the “Bullshit” bookmark folder.

Yet, Thought Catalog is not an exception even by today’s standards.

Now in retrospect, we can see that a big part this drivel was a certain class of websites’ sensationalism greed. Greed for page views.

The gleeful mockery of Upworthy headlines over the last few months, that mad sparkle of euphoria in users eyes as they tore down a site that, at its core was trying to provide a positive counter-balance for the prevailing negativity of the internet (disturbing, isn’t it?) was very much the same sparkle I see in those who would label Thought Catalog bullshit.

So, do not brainlessly brand Thought Catalog as pure bullshit. If you strictly judge, it is simply a website that did what it believed was right, along with greed and ego as motivators (just like any website today). Nothing more, nothing less.