The Soup Nazi is Back 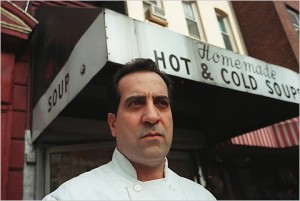 Today, The New York Times reported that Al Yeganeh, the inspiration for Larry David’s fascist soup-slinger, will reopen his storefront on July 20. In 2004 Yeganeh attempted to both sell his products on the Home Shopping Network and establish a franchise of his Original SoupMan restaurants. Now, six years later, Yeganeh is crawling back to his original midtown Manhattan location.

Congrats to Yeganeh for getting his shit together and all, but, no matter how delish the Mulligatawny, ya think you can stomach the incessant Seinfeld references made by all the chodes standing in line?