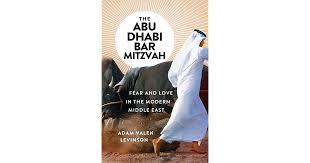 Back when Jewdar was but a lad, we developed a bit of a man-crush on Sir Richard Burton.  To clarify, it was the Victorian explorer,  not the Elizabethan husband.  We had read of him first in Philip Jose Farmer’s Riverworld series, and, flaws notwithstanding (including some unfortunate sentiments regarding Jew-know-who) found him a fascinating and thrilling character.  Moreover, we dreamed of the life of adventure and danger that he lived.

If we may borrow from Adam Levinson (who borrowed from Corinthians), when we became a man, we set aside childish things.  We got out of the army, went right into college, and before long, into Orthodoxy, grad school, marriage, and so on on, all of which made travel far less appealing (though the Jewdars do love a good American road trip).  Still, every now and then, one can still dream…

For those who share such dreams, or actually are travelers, we recommend Adam Levinson’s picaresquish [look how smart we are!] first book, The Abu Dhabi Bar Mitzvah, by Adam Levinson, a journalist and budding sociologist who has worked both for the Colbert Report and The Onion.  In his younger days, however, he spent time working for NYU Abu Dhabi, which he used as a base for the travels around the Middle East that are the basis for this nonfiction (hence only picaresquish as opposed to picaresque) account.

Levinson recounts his early memories of 9/11, and the sense of fear for the region that it instilled in him.  Unlike a normal youth, for whom such fears should have led to a desire to kill assorted Middle Easterners, Levinson, the son of academic-types, developed a desire to confront his fears by traveling to the region without an assault rifle.  Not Jewdar’s way of looking at the world, but different strokes for different folks.

The book really begins with his taking the NYU job in Abu Dhabi, and Jewdar definitely had concerns that this would be the kind of self-indulgent account of things that seem to be de rigeur for internet-bred types d’un certain age jeune.  To be sure, when Jewdar was younger, we self-indulged as well, and must confess, as a well established egomaniac, we aren’t really that interested in anybody’s thoughts that aren’t our own (or maybe that makes us a sociopath), but still, for whatever reason, not our cup of tea.

Thankfully, Levinson took off, and so did the narrative, as he travels to Lebanon, Syria, Iraq, Iran and assorted other places that most of us might think only of places one goes when one is deployed or hijacked.  Along the way, Levinson gives an engaging depiction of both people and places, and one can understand, both in his humor and outlook, how he would have inspired so many people along the way to participate one way or another in his meanderings. Indeed, so taken were we by him and his NJG Masha when–full disclosure–we met at a friend’s party in Bay Ridge that we paid the lion’s share of the cab to Brooklyn Heights when it turned out the R train wasn’t running.  It’s easy to imagine his various travel companions being similarly helpful and solicitous on his Middle Eastern adventures.

And truly, “adventures” is a good word for Levinson’s wanderings.  Not because he was necessarily in any danger (though it often hangs in the air), but because, for all his preparations (he had at least rudimentary knowledge of Arabic), he really seems to have taken his time in the region to find what was for him, the new and unknown, and to follow his life where it took him.  Some might feel that he presented too rosy a picture of how people viewed the Tribe in the Middle East, but then he does not pretend to be writing an academic study, and of course, one of the curious things about the Middle East has always been the the remarkable facility of people to separate the intense personal responsibilities of hospitality and patronage from the at-times abstract animosities of Tribe and Faith.  It is a tension the book does not ignore.  And as a whole, Jewdar definitely ended Levinson’s work knowing more about the subject than when we started (an admission we don’t often make).

The book is not without its flaws.  Like we said, the beginning seemed a bit self-indulgent, and that tone occasionally comes back.  But in some of its best moments, he is able to turn that self-indulgence into honesty, to recognize that a desire to see the best in things is no more honest than a desire to the see the worst, that for all those who engaged him honestly and warmly, there were others for whom he was a walking dollar sign (albeit, to their chagrin, not a very large one), and that that while he may have found some quite pleasant homes to stay in, the neighborhood was not always so gracious to its permanent denizens.

As for Levinson, we don’t know if he’s cured his travel bug, but we hope, for the sake of his long-suffering girlfriend Masha, that he could at least stop acting “like a crazy,” and seek his adventures in more mundane settings, like the occasional Bay Ridge birthday party.

Jewdar has become quite the homebody, and, as a rule, has no interest in traveling to places full of cheap schwarma that we can’t eat (that may, in fact, be our definition of hell).  When we lay our head on the pillow at night, we tend to see a pop culture-induced mash-up of zombies, aliens, monsters and Nazis.  But for those whose dreams still take them far afield, The Abu Dhabi Bar Mitzvah serves as a nice surrogate, if not a reminder that if it can be willed, it is no dream.