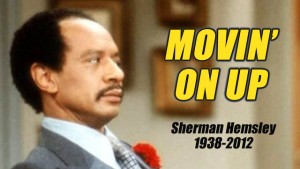 The death this past week of Sherman Helmsley got Jewdar thinking about TV.  Okay, Jewdar was already thinking about TV, but it got us to thinking about George Jefferson.  Most notably, it got us to thinking about the way that in the 1970’s Norman Lear, in shows like  All in the Family and The Jeffersons, transformed TV.  After decades of “Consensus TV,” in which there was either no diversity, or, if there was, no differences.  Then came the ’70’s, and Norman Lear showed America that ethnic and racial conflict could be funny.  We say “could be” because, of course, it has to be done right.  Case in point, this little treasure from the Land of the Pharaohs.  It seems an Egyptian TV show thought it would be amusing to watch the fireworks when they call in some Egyptian celebrities for interviews, and then convince them they’re being interviewed by an Israeli channel.  Hilarity ensues, with the the host being physically attacked, the Holocaust disparaged, and one guest talking about how much he hates “the Jews.”

Far be it from Jewdar to tell people how to do their job, but we’re thinking that it’s a wise man who learns from all men.  If Jewdar wanted to build a pyramid, we know who we’d be talking to.  By the same token, we’re thinking that if Egyptian TV wants to play on ethnic division, they might want to get some help from someone who knows how to do it right.  Of course, Norman Lear is a Member of the Tribe, so we don’t expect they’ll be calling on him any time soon. Nor do we expect that, in deference to the debt they owe him, that the Egyptians will ease off on the Ewjays.   But then, he’s not the first Lear to learn how sharp the thanklessness of a child can be.