Thought you’d maxed out your fascist schadenfreude after reading about the Bavarian town that punked a couple hundred marching neo-Nazis into raising thousands of dollars to combat extremism? Think again. A Spanish man with a history of marching through Barcelona decked out in Swastikas snuck his way into that city’s zoo’s lion enclosure this past weekend. He was promptly mauled. 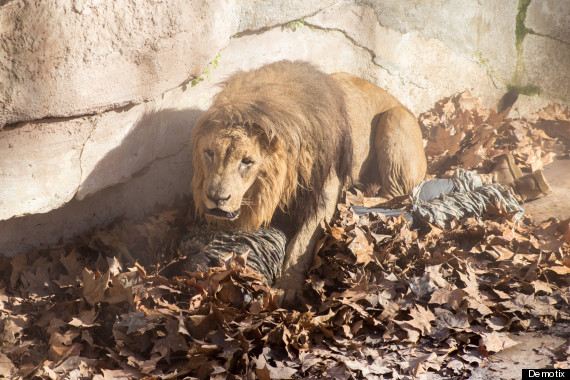 According to eyewitnesses, a man wearing army fatigues scaled a security fence before dropping into the sunken enclosure, facing off with one of the exhibit’s lionesses… who immediately dragged him into a tunnel and started chewing. The man carried with him a duffle bag, allegedly containing a banner – the message of which we may never know, since he was too busy being eaten by lions to complete his master protest plan. After half an hour, the 45 year old man, covered in claw and bite marks, was finally rescued by workers who used hoses to disperse the big cats. He was taken to the local hospital where he is being treated for severe, but allegedly non-life threatening injuries.

The man, later identified as Justo Jose, had been arrested just last month for plastering swastikas on Barcelona’s iconic La Pedrera building, as part of an apparent protest against abortion. While some news outlets have tagged him as being a Neo-Nazi, those charges seem to be entirely unfounded. Rather, it looks like this is just a guy who looooves using swastikas to make his point. Asshole? Yes. Nazi? Not necessarily.

Still, this is, if nothing else, a cautionary tale. If your baseline for political protest is to wave a fascist flag around, pretty soon you’re gonna have to up the ante in order to get people’s attention. And if “upping the ante” means “getting eaten by big cats” well, maybe you should rethink the entire decision making process that lead you to the lions den. I’d start by packing away the Nazi gear, and getting a real hobby. Preferably one where you don’t leave the house.