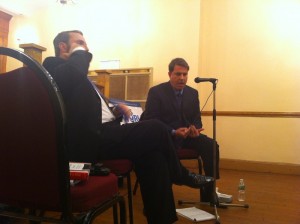 Last night, at the Carlebach Synagogue in Manhattan, some thirty odd people sat and listened patiently to the repartee between Rabbi Shmuley Boteach and Rick Sanchez. Both are media icons/whores in their own rights, so I figured I’d pop my head in to give a listen to what would, most likely, be a self-aggrandizing evening. Schadenfreude seekers, come one come all.

For those who forgot already, Rick Sanchez was a CNN personality who fell from grace after implying that the Jews (people like Jon Stewart) run the media. What happened to him after this perceived threat of antisemitism? The Elders of Zion showed him the door.

Fast forward to today. Rabbi Shmuley, most famously known for his closeness to Michael Jackson, has books to sell and Rick Sanchez is out of work. So Boteach opted to give him a platform to fully apologize to the Jews.

A regular P.T. Barnum in a yarmulke, Shmuley billed his discussion about the comments that got Sanchez fired as the main event of the evening, but first we needed context. Context, to Shmuley, is analyzing one’s childhood and ethnic sense of self-doubt in front of a live audience, so he rehashed Sanchez’s humble beginnings. He told him that he was obviously embarrassed by his father’s shoe-shining, dishwashing days. Sanchez didn’t take, but he certainly laid on his own sense of schmaltz.

“My parents didn’t give me much,” he welled up, “but they gave me my name.” At this point, very early in the two-hour talk, Sanchez became too emotional to speak. He went on to explain that his name had been dragged through the mud, that he’s not an anti-semite, and that his words were taken out of context. This is a man who has been completely broken by the experience.

As any showman knows, you don’t open with the good stuff, so Rabbi Shmuley kept pushing off this crying man. “We’ll get to your comments, but first, we need context!”. If Sanchez thought he could come to this famous hippie-dippy shul and get an apology off his chest, he had another thing coming. Boteach then went through the history of Sanchez’s hispanic upbringing in this country and challenged him to explain why he felt like he was an outsider even though he was a successful personality on one of the nation’s “most respected new sources”.

Sanchez had no answers for Shmuley’s claims. Why was he so pig-headed that he took Jon Stewart’s constant berating (jokes!) of him so seriously? Because he screwed up, basically. That was the extent of it. And Sanchez repeated himself over and over again, never missing a chance to emotionally well up for the cameras. Peppered throughout, Shmuley kept explaining the problems with this country and why he has written so many different books to explain it. “All for sale in the back, by the way.”

If any one revelation did come out of the evening it is that Shmuley Boteach got Rick Sanchez to stand behind one of his misconstrued comments. In October, when asked whether or not Jon Stewart understands minorities because he is one, a Jew, Sanchez responded “Very powerless people… [snickers] He’s such a minority, I mean, you know [sarcastically]… Please, what are you kidding?” Shmuley went off on a rant about how successful the Jews have been in America and that our suffering here could not be compared to African-Americans or Hispanics. He took Sanchez’s comment to mean the Jews are successful, and challenged the TV host to stand behind his comment.

Rabbi Boteach is playing with fire here. The grand irony of Sanchez’s downfall is that his comments were taken to mean that the Jews control the media, and so he was fired by one of the most powerful media conglomerates in the world. If I were him, I would want to get as far away from the words responsible for my undoing as possible. But Shmuley, prodding and goofy as he is, got Sanchez to admit what he said was true, but that it’s not anti-semitic. Good for Shmuley, potentially bad for Sanchez.

In the end, the whole event played as a grand spectacle for Rabbi Shmuley Boteach, sometimes at the expense of Rick Sanchez. In his final pronouncement, Shmuley declared that Rick Sanchez is not an anti-semite, but a “broken American male, and so this is for you.” He handed him a copy of his 2008 book, “The Broken American Male: And How to Fix Him”. I couldn’t make this shit up. Rick Sanchez sat in a room for two hours to shill books for Shmuley Boteach. Or maybe to redeem himself from something no one cares about any more.