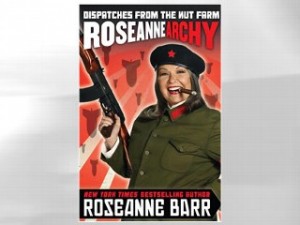 Jewdar is not thrilled with former Heeb photo femme Roseanne Barr. We are sufficiently open-minded to not judge people for their fetishes. You want to put on a miner’s helmet and cover yourself with peanut butter? As long as it’s not creamy, it’s okay with us.

So when we saw that Roseanne Barr, who’d done a drag-Hitler thing for Heeb’s Germany issue way, way, way back in the day, had done a Che Guevara thing for the cover of her latest book, we were cool with it, figuring that she had a thing for mustachioed devotees of totalitarian ideologies.

True, we would have gone with Stalin, and we wouldn’t have confused things by calling the book Roseannarchy when Che was a communist, but Jewdar is not petty. What does upset us, though, is that Roseanne didn’t do a little more name-dropping when the subject of this supposedly controversial book cover came up. Would it have killed her to have said “Sure, I’m dressed like Che right now, but you should have seen what I did for Heeb.”