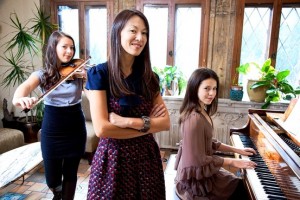 The Wall Street Journal just featured a piece by Yale Law professor Amy Chua (above, with daughters) about how Chinese mothers are superior, because they nag and push and noodge their kids to success. Reading it, Jewdar couldn’t help but feel we’d heard all this before.  We could understand why Professor Chua might think this is all pretty radical stuff, but you’d think hubby, Yale Law professor Jed Rubenfeld might have told that the Chinese aren’t exactly the first model minority to introduce those methods to the West (and while Jewdar’s not going to begrudge the Chinese anything, there are over a billion of them–pound for pound, number of smart group members to number of group members total, we’re still the champs).

More importantly, for the sake of all of us, we hope Professor Rubenfeld lets the missus know that the end result of all of this is likely to be a whole generation of crappy Chinese comedians complaining about how their mothers made them neurotic.  Jewdar strongly suspects that the material won’t be any funnier running from top to bottom than it is from right to left.