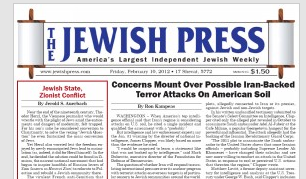 Well, no, not really. But that’s what their enemies are claiming.

And had you told Jewdar that he would be writing a defense of the Jewish Press, we would have said you were quite mad. The JP, for those not in the know, has historically been a mostly retrograde black hat Orthodox paper, replete with all the insularity and intolerance that one might expect from such a source (with some exceptions). But strange things are happening at the Jewishpress.com. A week ago they ran a fairly poignant op-ed by a gay orthodox Jew. As one might expect, this drew a certain amount of criticism, but here’s where it gets really crazy–rather than begging forgiveness, Jewishpress.com came out swinging. We have no idea where this will all lead (and we hope the website’s leadership still has jobs), but for now, we have nothing but respect for the crew at JP, and look forward to seeing what comes next.