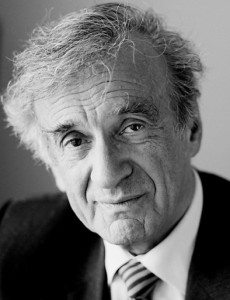 Jewdar is pleased to announce that the Jewish people no longer face any problems. That, at least, is the conclusion we draw from Elie Wiesel’s comments last week that Mitt Romney “morally…must respond” to news that some members of the Mormon Church did a posthumous baptism of Simon Wiesenthal. For those unaware, the Church of Latter Day Saints believes that one can be posthumously saved from eternal damnation; all they need is for a living Mormon to conduct a proxy baptism of the dead, whose soul will then be given the opportunity of remaining in hell or entering the Kingdom of Heaven (we presume most choose the latter). They’ve been doing this for years, but got into a bit of trouble years back when it turned out that they were baptizing Jews who’d died in the Holocaust. The Church had promised to stop baptizing deceased Jews, but a furor arose last week when it turned out that some Mormons, on their own initiative, had baptized Simon Wiesenthal. Which brings us to Elie Wiesel’s comments.

Now let’s say, first of all, that Jewdar couldn’t care less about posthumous baptism. In fact, we’ll go even further and say that as far as we’re concerned, any Mormon who wants to posthumously baptize us is free to do so. If, as we presume, the LDS are wrong, our soul will be untouched, and if they are right, then we get to go to heaven, which sounds like a pretty good deal on our part. But we strongly object to the notion that Mitt Romney needs to say anything on the subject. Romney is a Mormon; some other Mormons did something which some people think is wrong. At what point does a member of a particular religious community–even a prominent member–need to respond to every misdeed on the part of another member of that group? Joe Lieberman, for example, is the nation’s most prominent Sabbath-observing Jewish politician; I don’t recall anybody expecting that he needs to answer for the misdeeds of haredim in Beit Shemesh (and can’t help but feel that if he were called upon to do so, Elie Wiesel would be among those decrying it). Romney is a jackass, but we firmly support his right to be his own jackass, and not to be held accountable for the jackassery (real or imagined) of others.

Jewdar’s mother, however, offered an interesting possibility. Wiesel and Wiesenthal were longtime rivals, both for their differing ideas of how the Holocaust should be memorialized as well as for the status of “most prominent survivor.” Given this rivalry, Jewdar’s mother couldn’t help but wondering if this was Wiesel’s last little dig at his rival, denying him that last chance at salvation. We have an image of Wiesenthal about to enter the Pearly Gates, when St. Peter stops him and says “We’re sorry, Mr. Wiesenthal, but Elie Wiesel had them annul your baptism.” Wiesenthal drops to his knees, looks to the heavens (which in this case is straight ahead, not up) and shouts “Wieseellllllllllllllllllll!”

At any rate, if we’ve reached the point where we have nothing else to worry about other than the baptism of Jews who are far past the point of caring, we must be doing okay.