Passover Satyrs For The Jewish Pagan In Your Life

I know we just got past the high holidays, and that we’re still months away from Hanukkah, but dammit if I’m not already getting excited for Passover and my chance to wear this new Judeo-pagen teeshirt: 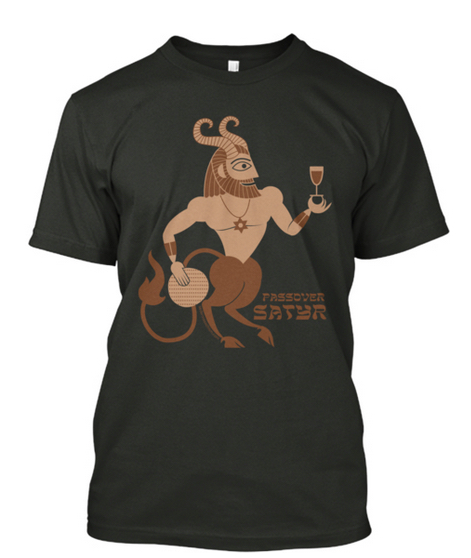 The tee, from from cartoonist Nina Paley (she of the viciously sharp “This Land Is Mine” video you probably saw ping-ponging around Facebook a while back,) is being sold to help finance her upcoming Passover-themed animated feature film Seder-Masochism.

When I told a (gentile) friend I was making a movie about the Seder, she thought I said “satyr.” The idea cracked me up, but I didn’t illustrate it because who needs more associations of Jews with horns and cloven hooves? Until now. Here is the Passover Satyr.

Anticipating the rush of Jewish neo-paganists eager to grab her gear, Paley is only selling the shirts through Nov. 3rd of this year, which means you’ve gotta act fast if you wanna rep sexually aggressive mythological goat-men at this year’s seder.

Paley also released this just-finished scene from Seder-Masochism, in which the angel of Death croons to hapless Egyptians even as he kills their first born.

Who needs Ridley Scott’s laughably bizarre Exodus: Gods and Kings? This is the Moses movie I’m looking forward to.