Not So Golden Girl 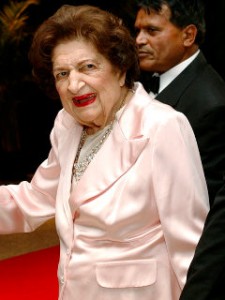 Oh, Helen Thomas. Nobody really remembers why you mattered to begin with, but at some point, you simply became one of those institutions.  What a grand, old dame, what a great character.   But while we may not remember how she began, we’ll all remember how she ended–with a vitriolic little racist rant calling for Israelis to go “back” to Poland and Germany.

While we reject calls to drop her from the White House Press Corps (you know, not a great thing for the gov’t to ban reporters whose ideas they find distasteful–there’s probably a rule about that somewhere), we think a better solution would be for her to bow out gracefully, and  to seamlessly replace her with the current octogenarian flavor of the month–White House Press Corps, meet Betty White!