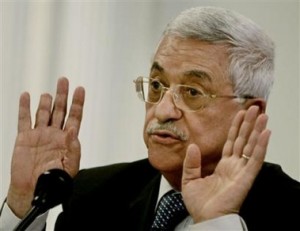 For those who missed it, PA Prexy Mahmud Abbas, in his plea for recognition of a unilaterally-declared Palestinian state, engaged in a little bit of historical revising (and by that, I mean a lot of historical dishonesty). He began with a little personal family history:
SIXTY-THREE years ago, a 13-year-old Palestinian boy was forced to leave his home in the Galilean city of Safed and flee with his family to Syria.

All very moving and all, certainly more compelling than the account he gave a few years back:

“People were motivated to run away… They feared retribution from Zionist terrorist organizations – particularly from the Safed ones. Those of us from Safed especially feared that the Jews harbored old desires to avenge what happened during the 1929 uprising…. They realized the balance of forces was shifting and therefore the whole town was abandoned on the basis of this rationale – saving our lives and our belongings.”

Now, Jewdar recognizes that “forced” is somewhat vague. One might argue that he was forced by war, or forced by circumstance, or even that Abbas, at 13, was “forced” by his parents to leave Safed, so the Times Op-ed claim was not technically dishonest, but there does seem to be an implication that he was “forced” by the Israelis.   Still, as the son of a refugee, Jewdar is inclined to be generous in such matters. More serious, however, is what he says a little further on:

It is important to note that the last time the question of Palestinian statehood took center stage at the General Assembly, the question posed to the international community was whether our homeland should be partitioned into two states. In November 1947, the General Assembly made its recommendation and answered in the affirmative. Shortly thereafter, Zionist forces expelled Palestinian Arabs to ensure a decisive Jewish majority in the future state of Israel, and Arab armies intervened. War and further expulsions ensued.

Now, granted, Jewdar never did go on and get the PhD, but still, if memory serves us right, things happened a little differently back in 1947. Yes, the UN voted to partition the Mandate of Palestine, at which point Arab attacks against Jews in Palestine began (specifically, the first attack occurred the day after the vote, on a bus full of Jews near Tel-Aviv). The Arab states didn’t intervene to prevent expulsions, as Abbas, suggests, but had been preparing for an invasion of the Jewish areas even before the UN vote.

Jewdar recognizes that the Arabs either in or out of Palestine had no obligation to accept partition.  But the point is that they were the ones who rejected it.  Had they not done so, two states would have been established; one an Arab state with almost no Jews in it, the other, a Jewish state with a bare Jewish majority (about 55% to 45%).  That balance would have shifted as refugees came in from Europe and perhaps immigrants from elsewhere, but the bottom line is that Abbas perpetuates the myth that the Palestinian refugee problem was a direct result of the creation of Israel.  It was not.

Whatever crimes Israel or Israeli forces committed, the Palestinian refugee problem wasn’t a result of Israel’s creation; it was a result of the war that came from the Arab rejection of Israel’s creation.  It may very well be that plenty of Zionists would have liked to have expelled Arabs from the Jewish state; but without the war, that wouldn’t have happened, and those Arabs would have remained in their homes, with the rights of “full and equal citizenship” offered them in the Israeli Declaration of Independence.

As for what happened afterwards, Abbas seems to have forgotten that at no point from 1948 to 1967 did Israel in any way prevent the establishment of a Palestinian state in the West Bank or Gaza; he seems have left out those 19 years in which the area in which he wants to establish a Palestinian state were ruled by those friendly Arab regimes. Apparently, after the “intervention,” they forgot why they came.  Abbas may have gotten his PhD in History, but work like this reminds Jewdar why Oriental College in Moscow was considered a party school.

This, of course is all water under the bridge, and Jewdar as a rule does not find it productive to argue about what was. But one thing in Abbas’s op-ed piece did strike us as useful (though we’re sure no one on the Israeli side will be smart enough to pick up on it). Abbas has seemed to accept that the 1947 UN Resolution justifies the creation of a Palestinian state. Of course, what he failed to mention is that the very same resolution didn’t just call for the establishment of another state, it called for the establishment of a “Jewish state.” As some readers might recall, recognizing Israel as a “Jewish state” is precisely what Abbas refused to do as recently as last year.

Wouldn’t it be great if someone on the Israeli side of things called him on it, and said Israel is ready to begin negotiations based on the principles of the UN resolution – which Abbas has now accepted – that a Jewish state has a right to exist in what Abbas calls “Palestine?”