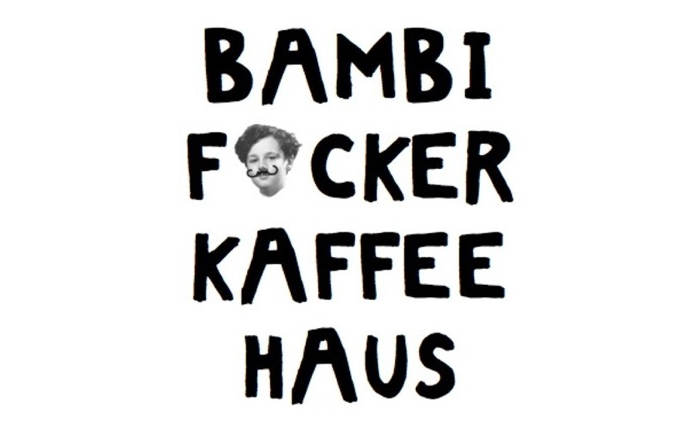 Brooklyn-based theatre company Little Lord is currently working on a production based on Salten called “BAMBIF*CKER/KAFFEEHAUS”, which they describe as “a caffeinated ride through coffeehouse culture, the birth of psychoanalysis, political Zionism, persecution complex, sexualized rabbits, The Sound of Music, and everyone’s favorite baby deer.”

With a Kickstarter to fund their production currently running, HEEB caught up with Little Lord‘s Michael Levinton and Laura von Holt

ML: That was actually our entry point. We came across the one with Patricia Rhomberg from 1976. In English it’s dubbed as “Sensational Janine.” Then we read up on it and found the Bambi connection and thought that there was something there. That’s how it began.

All these films are based on this character that Salten created, Josefine Mutzenbacher. He wrote her “memoirs”, recounting her way to becoming a desired prostitute in Vienna in the 19th century. But he also wrote “Bambi, A Life in the Woods” which was turned of course into a Disney movie. For many kids watching Bambi’s mother get shot was very traumatic. For you as well?

ML: It wasn’t actually. What had bothered me about it was when the forest animals went through puberty and their voices changed. That to me was the traumatic thing, not seeing his mother shot. We all felt more moved by Dumbo.

So what were your thoughts when you found out about Salten? Where did the idea to do this production come from?

ML: It’s not like “oh, aren’t we naughty, here’s a kids’ book with sex in it”. They’re actually both about the same thing. They’re both about coming of age, trying to learn how to live in a broader society as the other, as an outsider and they’re both stories of development and identity. They both follow the same trajectory, and weirdly mirror each other throughout.

LVH: Yeah, we’re very interested in faulty nostalgias and the way in which you sense some things are darker than they’re presented. 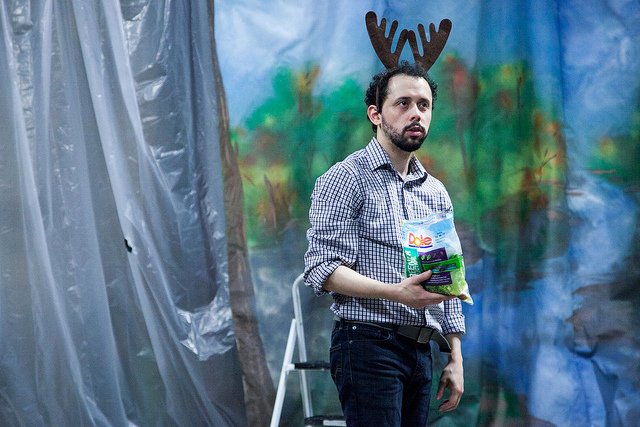 How are you trying to reflect that in your production?

ML: We’re layering it with dialogue from the movie and the book. So you have the hunt scene from Bambi and that’s followed by a passage from Josefine talking about the death of her mother. So it suddenly becomes sex and death and it’s all completely connected. It very very quickly loses the gimmick.

And of course Vienna is where psychoanalysis started, where that connection between sex and death was really stressed. And it’s also the birthplace of that other important Jewish idea of the 20th century, Zionism.

ML: Yes, Freud and Herzl. So we actually do deep research into those things, a ton of it, and it’s very much throughout the production. But it’s also our own very poor understanding of Austrian culture. For me Austria is the Sound of Music. Our café doesn’t have Apfelstrudel but toaster strudel. Nescafe. Our Austria is Maria von Trapp spinning in the meadow and Falco and Johann Strauss. So we’re also saying we don’t have a right to talk about any of this stuff. We are the outsiders too. But that’s where the fun comes in.

For many people in Europe, both Jews and Non-Jews, this Vienna scene is like the ideal version of Jewish life: intellectual, secular yet conscious, cultured. Is there an awareness for this in the US?

LVH: When we were starting to investigate his contemporaries I just thought: it sounds so amazing! They’re in this gorgeous café and drinking coffee and having ideas and making art. And then you start reading the work and they’re hurling insults at each other and nobody believes in anybody else’s work . It sounds exactly like contemporary New York theater!

ML: You could definitely tie it to New York and Jewish assimilation in America. There’s a lot of mirroring. Also this tension between being an artist in New York and the rest of the country. The bubble seems similar.

And also everybody seems to be rich and poor at the same time.

ML: That’s actually what we liked about Salten, that he was of a somewhat different class than the rest of these guys in the coffeeshop. He was raised in the slums and he saw his father go bankrupt. And he has to have a day job whereas the rest of these guys don’t. And he worked with Herzl and wrote for the Zionist newspaper, whereas somebody like Schnitzler just poo-pooed the whole thing. So that tension about working and class and those different levels of identity is really appealing to us. 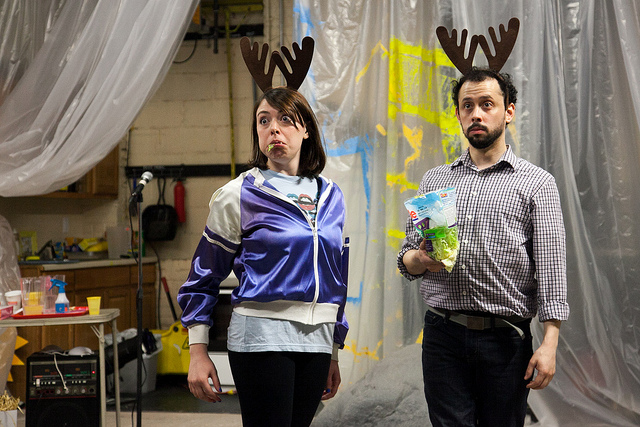 You could also say that Vienna is where camp, in the Susan Sontag sense, was invented.

ML: I like that. Especially because our work to a certain extent is camp but it is not campy. In English the word has become so riddled with bad connotations. But if you have someone coming onstage with deer antlers, knee-high socks on his arms, heels on his hands, holding a taxidermied deer head of his mother and then talking about art in Paris then yeah, that’s camp.

You’ve already dealt with a slightly less iconic Disney movie – your last show was about Pocahontas. What’s the connection there?

ML: Yeah, it was an investigation and adaptation of the story of Pocahontas, sort of framed as a birthing of America and American mythology. And we ended the show with “God Bless America” which of course was written by Irving Berlin, an American Jew who even said his religion was America. So we end with what has become this jingoistic anthem but in reality was written by someone who was trying to hide who he really is.

This is Little Lord’s eighth production, right? How long have you guys been around?

ML: Laura and I met in school, and Little Lord’s been around since 2007. This is our eighth or ninth full length original piece for theater. It’s mostly offbeat adaptations of either classic texts or neglected texts. We have this idea of theater as an event. We don’t like to do theater in theaters. So we try to transform the venues as much as possible. For Pocahontas we built a roadside attraction museum. Jewqueen, which was based on the purimspiel, was like your sister’s bat mitzvah party from 1991.

And what have you planned for “Bambif*cker/Kaffeehaus”?

ML: We’re building our own bad American version of a Viennese cafe, basically.

LVH: So it’s going to be very theatrical without being theatrical. We won’t have light and sound like you would expect.

Do you have an ideal audience in mind?

ML: The idea for us is that it can appeal to people on so many different levels. Of course we’re reaching out to the big guns like the Austrian Kulturforum, the Leo-Baeck-Institut for people who would have a personal connection to this stuff. But at the same time it’s in Brooklyn, so our audience is predominantly in their late 20s and 30s. We reach out to a lot of people who don’t normally go to the theatre because those have been some of our biggest fans, people who can be surprised by what you can do with the form and with subject matter and with found texts. But really anyone who has ever loved a Disney movie, watched a porn, read a book, drank a cup of coffee. I mean it has “fucker” in the title, we’re not picky.

LVH: There’s always a playful element, you never know what comes next in a show.

ML: If you know a lot about it or if you don’t know anything about it you can enjoy it. Even though sometimes it’s heady stuff it’s still predominantly fun. Cause why do it if it’s not fun? Why go to theater if it’s not gonna be at least entertaining. And of course it ends up being Queer, Jewish, American, cause that is who I am and what I am interested in and what I filter everything through.

So how far along are you?

ML: We still have our Kickstarter going and we just finished our latest workshop. And then we are going to go away for a month and a half to write and then see how the script stands. We have a little showing in January and then we’ll have our first production in March.

And maybe one day you’ll actually perform it in Vienna.

ML: That would be the dream, yeah! APFELSTRUDEL!!!