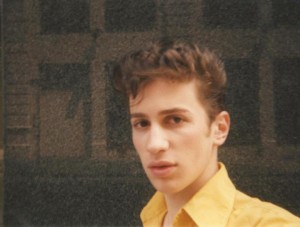 We know, we know, the title and photo suggest a piece about a young street hustler in the 1980’s, but this is actually a rare serious moment for Jewdar, who has once again been called upon to help some Yiddishe schnorrer raise money.  In this case, however, since the schnorrer in question is Heeb’s version of Hugh Hefner, Josh Neuman, we’re happy to oblige.  Josh is putting together a movie, Johnny Physical Lives,  about his brother, Jonathan, who died of leukemia, as told through a mix of footage from Jonathan’s punk band, the Physicals, and animated sequences featuring his alter-ego, Johnny Physical (think Decline and Fall of Western Civilization meets Waltz with Bashir meets Selena).  Of course, while we’d love it if you donated out of the goodness of your heart, Josh will kick back assorted gifts and prizes for those who make good with the shekels, and you know what, even Jewdar will contributing, and that definitely doesn’t happen every day.  And speaking of days, they need to raise 30,000 bucks by December 4, so why are you wasting your time reading this?

Watch the trailer and support the Kickstarter here.