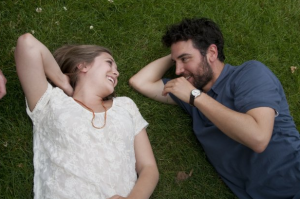 Josh Radnor does more than the sitcom thing. He also writes, directs, produces, and stars in indie films. At the same time. His most recent project is Liberal Arts, a film about  Jessie, a thirty-five year old liberal arts university alum who visits his alma matter and finds himself uncomfortably attracted to nineteen-year-old student Zippy, played by Elizabeth Olsen (and played well, I might add).

If you haven’t caught on yet, it’s one of those “voice of our generation” films. In other words, if you liked Garden State, see it. And if you didn’t like Garden State, try seeing it anyway, because it’s kinda better.

Heeb attended a roundtable shortly before it’s New York release with Radnor, Olsen, and the accomplished Richard Jenkins, who plays Jessie’s former professor, quite possibly the best part of the film. Here are some of the questions asked and answered:

Q. When you’re watching the playback, do you look at it as the writer or as the actor?

Radnor: Depends on what is in front of me that needs to be looked at. If I’m looking at the playback for my performance, I’m looking to see that we got what was needed.

Olsen: It sounds so terrifying.

Radnor: Yeah, it’s rough, although editing myself in two movies and watching the playback right away kinda got me over that, you know, when you hear yourself on tape and you think “That’s not how I sound!” You go through that a bit as an actor. And I’ve so gotten over it. I just know, “that’s what I look like,” but I also know I’m capable of just as much bad acting as anyone. So the great thing about editing yourself is you get to sift through all the footage and pick the stuff that puts you in the best light. I’m holding all those things in my head at once; the take I’m looking at, and I’m also holding the whole picture of the whole thing in my head as both the writer and director.

Q. Do you think you could have written this ten years ago?

Radnor: No, and I don’t think I would have been drawn to it. Writing a movie about getting out of college at twenty-five is a lot different than writing it at thirty-five. I mean, I think in some ways I was in the midst of mourning college and getting out of college in the same way that Jessie was so I would have had no perspective on it. I kind of kicked that college nostalgia in my late twenties so I’m certainly not feeling it now. As much as I loved college and treasure the experiences, I don’t want to go back.

Q. Elizabeth, was there anything in your own college experience that you related to with your character, emotionally speaking?

Olsen: She’s someone who wants to jump ahead and go straight to being an adult, and I’ve had that my entire life, probably until now. I’m like, “I’m a child,” and I’m really happy being one. I feel more youthful probably than I did when I was nineteen years old. When I was nineteen I took myself way too seriously, and I think there’s something like that with Zippy. I took myself way too seriously for too many years.

Q. Richard: In the film your character says that he has always felt nineteen. How old do you feel?

Jenkins: About sixteen. It varies on the day. But I love going back, I just went to my high schools’ forty-fifth reunion. I love it. It was fantastic. My wife and I both went to the same college, so we try to go back as often as we can. It was a great time.

Q. If you could give advice to your nineteen-year-old self, what would it be?

Jenkins: I was terrified of this world, because it was so intimidating. But one thing I did learn is there’s room for everybody. And if you were meant to do it, you will find a way. You will. And if you’re not you’ll do something else.

Q. Josh. Why do you have the beard in the film?

Radnor: Well, I could give some fancy answers for it, one might be that he’s hiding a bit. The other thing is I hate shaving, so if I don’t have to shave everyday I prefer not to, especially when I have so many things on my plate. The other reason is, when I do shave, I look a lot like the guy I play on TV, and, you know, I’m not doing some sort of great, you know, [Jessie] doesn’t have a hunchback, and a prosthetic chin. So I just want to distinguish it a little bit, maybe just for me.

Q. If there is one book, or show, or movie, or song, that should be mandatory for everyone to hear or see, what is it?

Olsen: In my high school, for some reason my senior or junior year, they made Art History and Music History mandatory in order to graduate, which I thought was kind of random. And taking those courses just make you a much more full person. Those two classes I found, “Oh I have to do it,” and then you end up being open to a world, sitting in these free concerts, where there’s a quartet playing some concerto you’d never listen to. There’s something great about being forced to take those two classes.

Radnor: Music-wise, I’ve been listening to Karajan’s Berlin’s Philharmonic Beethoven’s symphonies from the 1970s, which are amazing.  A movie would be The Apartment by Billy Wilder. And a book would be Stephen Mitchell’s translation of the Bhagavad Gita. (Bet you didn’t see that one coming.)

Jenkins: If you’re an actor, I would say My Life In Art, by Constantin Stanislavski. The autobiography, not his books on acting. Crime and Punishment, I also would say. I think every young person should read Crime and Punishment. I love the Russians, I love the passion of the Russians, they’re pretty cool, it’s pretty amazing. I love Chekhov, you know. But those for me were really important. Music? Roy Orbison. I don’t know. I was the oldest guy at a Jason Mraz concert the other night.