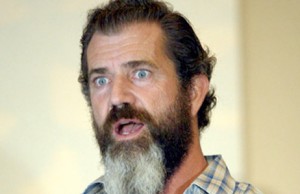 Sometimes Jewdar is so smart, we forget that others are not as gifted.  With all this hand-wringing and accusing over the current violence in the Middle East over “Innocence of Islam,” people seem to have forgotten that at the root of this is a low-budget movie.  And what is more powerful than a low-budget movie?  A big budget movie!  And Jewdar has just the plot to turn this tragedy into a US-Muslim world bromance.

The film begins with a bunch of terrorists in yarmulkes planting explosives in an LA mosque in the middle of the night.  All of a sudden, there’s a crackling, and a man on a horse appears, wearing a cowl so we don’t see his face, and begins to fight them.  One terrorist who he thought he’d killed is about to shoot him in the back, when the terrorist is shot.  The shooter is Riggs, from the Lethal Weapon series, played by Mel Gibson.  The fight over, the man on the horse introduces himself.  It’s Muhammed, who has been transported into our times!

Murtaugh has retired, and Riggs has gone through another couple of dead wives. He refuses to have a partner, and is again, considering killing himself, so nobody will work with him.    So he takes Muhammed on as his partner.  Riggs takes him to see Professor Darwish, a brilliant Arab-American physicist  who believes that his experiments caused a rift in the space-time continuum that brought Muhammed into our times.  He had lost his faith, and was trying to see if he could bring Muhammed to our time to see if the Koran was telling the truth. And it is perfect timing as well, since LA has seen a spate of attacks against Muslim sites by a JDL-type group.  Condemning the attacks has been the leader of a mainstream Jewish group, a character named “Abe Wolfman.

As the investigation–and the killing–continues, it eventually leads to Wolfman, who far from opposing the Jewish terrorism, is really organizing it.  But that’s not all–because it turns out that Abe Wolfman is really Ibrahim Walif, an Al-Quaeda sleeper agent who spent decades infiltrating Jewish communal institutions, and even that’s not all, because it turns out that Ibrahim and the rest of the Al-Quaeda leadership are really aliens who were sent here to get the world to fight a cataclysmic war in the Middle East that will jeopardize the global oil supply and thus cripple Earth’s military, thus paving the way for the alien conquest.

Riggs and Muhammed defeat the alien invasion, and Muhammed feels himself being drawn back into time.  Before he goes, he lowers his cowl, and we that he’s Mel Gibson!  He goes back in time, and Riggs and Darwish are left, puzzled.

A week later, Darwish calls Riggs back to his lab.  He’d taken DNA from Riggs and Muhammed’s blood (from the fight) and it turns out that Riggs is a descendant of the Prophet.  The one thing that puzzles Darwish is the time travel–he’s tried to duplicate the process, and he can’t, and he realizes his error–it couldn’t have worked in the first place.  Clearly, there was another force at work that brought Muhammed to our time.  But what could it be?

Oh, and somewhere in the movie, there should be a foxy Muslim love interest for Riggs.  We’re thinking Rima Fakih, first Muslim Miss USA.

If this doesn’t win hearts and minds, nothing will.  Hollywood and/or the State Department, Jewdar is awaiting your call.