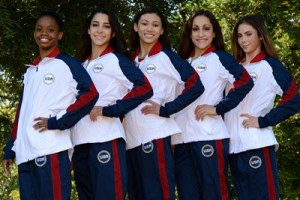 Okay, let Jewdar just get this out of the way—yes, there is something peculiar about the way that if it’s during a gymnastics event, grown men watching teenage girls in skimpy, skin-tight outfits isn’t supposed to be creepy.  That said, Jewdar spent last night watching the Olympics Womens’ Gymnastics team finals, and want to wish the Raisman family of Needham, Massachusetts a heartfelt mazel tov on their daughter Aly’s gold medal, and good luck in her upcoming individual competitions. 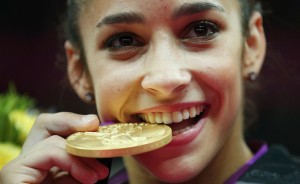 For them, they should shep much nachus (and we have to say that her floor routine to Hava Nagila was a great posthumous “screw-you” to Hitler—and yes, Jewdar does categorize most things in the world as either giving Hitler a posthumous victory or a posthumous defeat).  And of course, it’s a victory for the whole team, but while on the subject of the team, might we point out that the last time the American team won gold, back in ’96, they had NJG Kerri Strug.  Maybe it’s a coincidence, but just to be on the safe side, we think that four years from now, the team should make sure that one member of the team is also a Member of the Tribe.