A Spy in the House of Google? 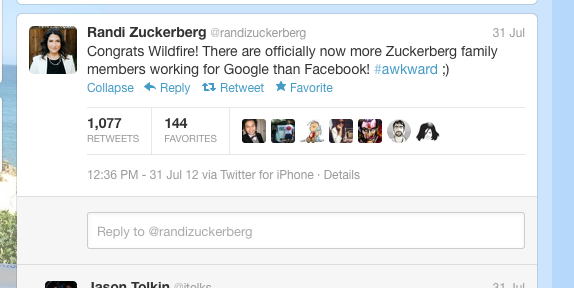 Facebook and Google may as well be the Montagues and Capulets of the Interweb. The two are fierce competitors, especially since the launch of Google+ highlighted Google’s increasing agenda to become a competitor in the arena of social networking. But now enemy lines have been breached by one of Facebook’s own: Mark Zuckerberg’s younger sister Arielle Zuckerberg.

Randi Zuckerberg, the Facebook co-founder and CEO’s older sister (who apprently is on a Bravo TV show about Silicon Valley…oh Andy Cohen, someone will punish you eventually) tweeted this on Tuesday:

How exactly did this happen? The company that Arielle Zuckerberg, the younger sister works for, Wildfire Interactive, was bought by Google. I guess they didn’t check the employee roster first?

And Arielle learned this news while she was abroad, with Fox News reporting her response to her new employment as,”I’m in Israel on Birthright and I just found out that I’m now a Google employee. Not gonna lie … This feels pretty awkward.” But it doesn’t have to be! You could get all Scarlett Johansson/Black Widow and use your inside information to help big brother (or Big Brother)! Think of the leather catsuits you could wear!