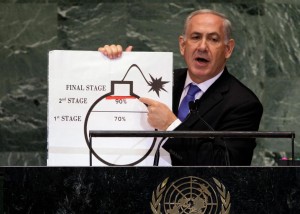 Jewdar is not a big fan of Netanyahu to start with (Really, Bibi, a combover?  You’re bald, accept it, move on–look, we all hope that we could have Ben Gurion’s hair when we reach that age, but Begin was bald and he was pretty cool), but his performance at the UN yesterday was borderline treasonous.  For decades, it has been a presumption–and for Israel’s part, a useful one–that Israel has an extensive, if unverified, nuclear arsenal.  If Bibi’s picture of an atomic bomb is any indication of what he thinks a nuclear weapon looks like, however, we think it fair to say that not only does Israel not have any nuclear weapons, we’re not even sure if they really know what they are (Hint–they aren’t bombs from a 1940’s Bugs Bunny cartoon). 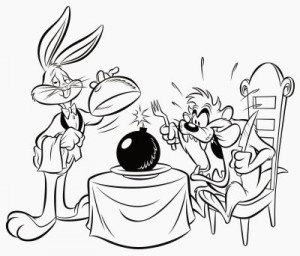