“I’m a nice guy, but ambitious as all get out.“: Elliott Kalan in Conversation 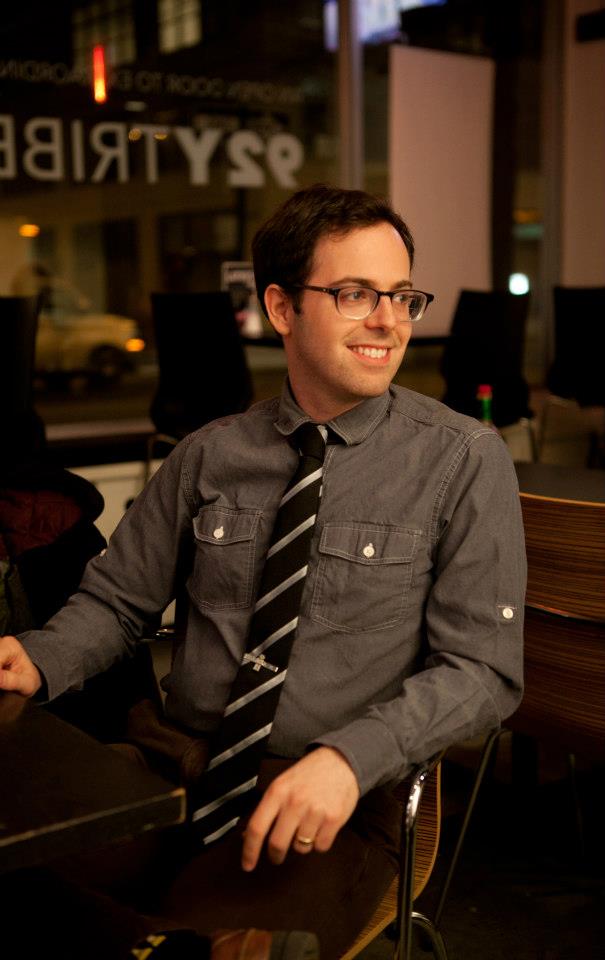 Elliott Kalan is finally taking break. For the last several years Kalan served as head writer of the Daily Show, co-hosted The Flop House, a cult podcast about about bad movies and most recently wrapped up writing “Spider-Man & the X-Men,” a six-issue limited-series for Marvel Comics.

“Spider-Man & the X-Men” is a technicolor romp featuring an extra snarky Spider-Man fulfilling a recently deceased Wolverine’s final wish: become the guidance counselor to a bunch of misfit X-students and figure out which one of them is a mole.

Kalan’s writing is sharp and often affecting: he knows the Spider-Man and X-Men worlds and does a seamless job of integrating two. Most importantly though: the book is just really, really funny. With the release of the the “Spider-Man & the X-Men” trade paperback we sat down with Kalan to talk the comic, leaving the Daily show and what comes next.

Can you talk a bit about how this project came to be and what you hoped to accomplish in telling such a short six-issue story?

I’d had a good run of journeyman work at Marvel, culminating in 2014’s Wolverine Annual which put me on the X-editors’ radar. They approached me with the concept of a book where Spider-Man has been asked by the not-yet-dead Wolverine to be a teacher at the Jean Grey School. All they needed me to figure out was why Wolverine asked him that, what students Spidey would be teaching, and what would happen next. Easy!

The plan at first was for me to do six issues because I was pretty sure I’d crack under the pressure of writing a book for longer than that while also being the head writer of The Daily Show (as it was, my main comic book writing time was on the subway going to and from my day job).

So knowing I had only six issues to work with, I decided to make the most of them fun-wise. My three goals were: pack in as many stories, villains, and locations as I could; explore the different ethics of the Spidey and mutant worlds; and show every character experiencing at least a little character growth.

I think what really distinguishes “Spider-Man & the X-Men” is just how damn fun it is. This comic feels like part of a new wave of Marvel books that embrace the fun and inherent comedy of superheroics. I’m thinking specifically of Chip Zdarsky’s “Howard the Duck” and Ryan North’s “Unbeatable Squirrel-Girl” which are hilarious, exciting and full of heart.

Do you find yourself as a writer and a reader not as interested in the grim, ultra-serious storytelling in comics?

Ultimately, there’s room for lots of different kinds of stories in superhero comics and so there’s space for the kinds of stories that come to me naturally (lighter, more fun ones) and for the darker stuff. It’s when one tone dominates that it can get tiring.

But if I as a moviegoer can enjoy watching both “Groundhog Day” and “Cries and Whispers”, why can’t I have both fun and grim comics? Hopefully post-Secret Wars there’ll be plenty of room for all kinds of stories.

The X-Men featured in the run are all mutants with mutations that some might call profound deformities. Even Hellion, the pretty boy, has robotic hands. Do you think these kids are the troublemakers because they don’t have the same kind of “passing privilege” that other mutants do?

I think that’s a big part of it, and something that I could have made more explicit in the book — that there’s an unspoken hierarchy among mutants between those who choose to separate themselves from humanity but could always return, and those whose bodies have made the decision for them in an irreversible way.

After re-reading the run, what really stood out to me was how you use Spidey’s “with great power comes great responsibility” philosophy to interrogate the X-Men’s more militant stance that can often favor force over other considerations… like human life.

I came into this as a firm webhead thinking, “Spidey’s out there helping strangers while the X-Men spend a lot of time hanging around their mansion protecting themselves.” After all, Spider-Man is one of the two guiding moral polestars of my life. But after putting myself in the mutants’ heads for awhile it became clearer that it’s relatively easy for Spidey to live these higher ideals when he doesn’t have the problem of being constantly in danger because of intolerance.

The X-Men would love to live in a world where they’re purely heroes, but the world doesn’t work that way for them. To twist something I have Rachel Summers say in the book, endangered species can’t afford ironclad ideals. So while I believe more in Spider-Man’s code of ethics, I came to see that the X-Men’s was also valid. I think building respect for both of these valid but conflicting models of responsibility was a goal I didn’t quite achieve but was working towards.

You recently stepped down as the head writer of the Daily Show. On a recent Flop House you mentioned that the decision was entirely yours and the producers were hoping you’d stay on.

I was feeling burnt out on the daily schedule of the show (which is a hard and relentless one) and especially how little it meant I got to see my son, who’s a toddler right now and the funniest, most adorable kid. I’d been with the show for a long time and was ready for something else, though it was a tough decision to make.

I’m so proud of the work that I did there, and I really feel I grew up at the show, from a naive youth of 20 to a haggard old man of 33, and it made me who I am today. But I was just ready for something different, new, and more family-time-filled, and this was the best moment to take advantage of that. So as cliche as it sounds, I left the show to spend more time with my family. Lame, I know!

You mentioned on that same Flop House episode that you’re kind of done with topical themes. I’m guessing you’d like to work more in narrative. If you were to develop another TV show — narrative or not — would you be want to showrun or would that feel a little too all consuming?

I don’t think I’m completely done with topical comedy, but I needed to take a bit of a breather from it. It feels arrogant of me to be like, “Yeah, sure, I guess I’d run a show.” As if I’d be doing someone a favor by doing that when really it’s an amazing opportunity to be grateful for to be given the chance to run something, especially since it’d give me the ability to get as much of my voice as possible gets into the final work. I’m a nice guy, but ambitious as all get out.

Last question: Have you and your Flop House comrades been approached by anyone to develop the show into something bigger like a TV show or some kind of web series?

We very briefly talked to someone once about doing some kind of web thing with it, but we were all too busy to actually make anything of it. Now we’re still pretty busy, but we’re open to the concept. You asked about my dream gig earlier, if someone wanted to pay me to make goofy, stream-of-consciousness jokes about bad movies, that’s basically it. TV and Web Producers, get in touch with this! We’re shameless!