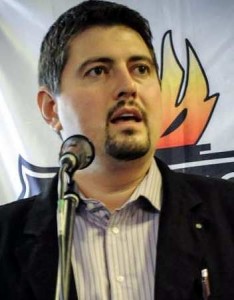 Poor Csanad Szegedi. As a leader of Hungary’s far-right Jobbik Part, he had a bright future, helping to educate his countrymen about the perils of the Jews, such as the privatization of state properties by  “people in the Hungarian political elite who shielded themselves in their Jewishness.”

Turns out the rising star of the Hungarian Right had a little secret–he had six-points.  And, to continue this metaphor, he is a star who has fallen.  Turns out that not only is Szegedi’s mother Jewish (so he’s really, really Jewish), but when he was confronted with this information some months ago, he offered to bribe the guy into keeping quiet.  Unbeknownst to him, the guy in question was recording the conversation.

We’re willing to accept that he didn’t really know about his background–he certainly wouldn’t be the first Eastern European whose Jewish antecedence was kept hidden by parents or grandparents who’d been through the Holocaust–and Hungarian Jewry in particular has had distinctly assimilationinst tendencies since the 19th century.  But nonetheless, whether he knew or not, there is something enjoyable about watching a prick like him being hoisted with his own petard.

Szegedi is currently going through a bit of a reckoning, and has been talking not only to his family, but to a Hungarian rabbi.  We’re not ready to count Szegedi out yet (just look at the current revival of secret-Jew prick George Allen’s political prospects), but we’d like to remind him that if things get too bad for him in Hungary, at least now he has the option of making Aliyah.