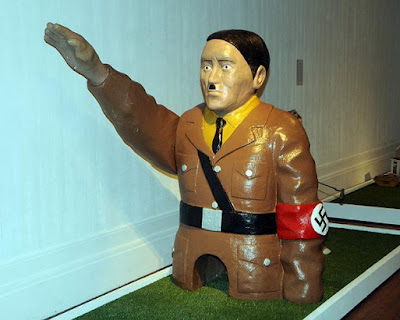 It’s pretty easy to get Hitler’s approval, you just have to sink a putt.

At the Doug Fishbone and Friends Adventureland Golf exhibit in the UK, Jake and Dinos Chapman and have created an…unconventional mini golf hole. A sculpture of Hitler resides over the hole and salutes if you make your ball in. Watch:

In the artists’ words: “The Chapman’s saluting Adolf Hitler places the powerful image of the Nazi regime within the context of holiday fun and in doing so makes reference to the British wartime spirit of making humour at the fuehrer’s expense.” Because who hasn’t been dying to get saluted by Hitler? The exhibit also features a Saddam Hussein who topples over if you make your shot.